They say all good things must come to an end. And with this final entry into Speculative Fiction, we've come to a close. John A. Pitts volunteered to take on a topic, when Ken Scholes recruited him to the cause. I have to admit, I'm a slacker. I haven't made the time to read John's books yet, but Black Blade Blues, is on my to read list. Plus he's a fellow martial artist, as his post on writing compelling action sequences shows. Without further adieu, let's get to the reason we are all here. 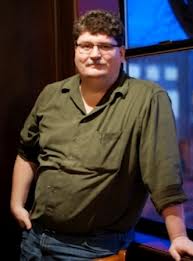 Action Sequences with John A. Pitts

Action Sequences are essential to writing any story.  A good action sequence drives the story forward, keeping the reader at the edge of their seat, holding their breath, while they flip the pages with urgent need.

Many writers assume that action sequences are synonymous with battle scenes.  This is a misnomer.  While fight scenes are definitely action, many things encompass a good action sequence.  Car chases come to mind, or a heroine running to safety, trying to avoid being eaten by a beastie.
In my novel, Honeyed Words, I have one such scene that I'll use to illustrate.

Katie spun around, listening.  There were noises in the walls.  She glanced up at the windows; the black, swirling mass of spirits continued to spiral down toward the house from the sky.

Whatever was happening here was drawing in the spirits from all around.  Out of the corner of her eye, she saw spiders crawling from the walls.  Eaters had breached the house.  Masses of them were pouring through the windows then, flowing around Sarah and Qindra, but coming right for Katie.

Out in the hall, she bounced against the bedroom door.  The dead man sat up, opened his eyes and hissed at her.  She fell back against the wall, ping-ponging down the hall, past the laundry where the face spoke to her through the dryer door.

Something scrambled across the tile of the bathroom, but it had not reached the door, and she ran on.

Here young Katie is trapped in a haunted house which is being inundated with spirits, walking corpses and eaters, a spider like creature from a sideways dimension that parallels our own.  Notice while the sentences start out longer, setting the stage for the events at hand.  There is no fight here, just terror as she flees back to the front of the house, hoping to avoid the nasties that are coming for her.

Notice the short choppy sentences and clauses.  The point of an action sequence is to build tension and drive the story forward.  The horror aspect of this scene adds to the overall sense of urgency.
Another way to show action is in a fight situation.  In Black Blade Blues, my main character, Sarah Beauhall, has her first real battle.

No one stopped me when I careened through downtown.  I parked in front of a fire hydrant and jumped out, heading for Katie's door.

"'Ware, smith," Homeless Joe yelled at me as he hobbled around the corner.  "Flee, child, before it is too late."

I spun around.  Joe was nearly running with a large staff in his hand, limping along with a bad knee or hip, I never knew which.  I took a step toward him, curious about his sudden outburst when two very large bodies came out from the alley and hit Joe.  The first man, whom I recognized as Ernie from the other night, clipped Joe on the back of the head, sending the old man sprawling onto the sidewalk.

The second thug, Bert, kicked the staff away and stomped down on Joe's elbow.  I heard the pop from the street.  Joe let out a guttural cry, and Ernie kicked him in the chest.

"Leave him alone," I shouted, balling my fists at my side.

Ernie kicked Joe again, and Bert turned to me with a feral grin.  "You again," he said.  "I'll squeeze your head until it pops."

He took a step toward me, and Joe lunged forward, grabbing him by the ankle and causing him to trip.
I turned to the car, fumbled the keys a moment, and then got the hatch opened.  My hammers were in the back, along with the rest of my personal smithing gear.

I found the first hammer, and at the same time, found the roll of pants and swords.  My left hand fell on Gram's pommel and the world shifted slightly.  The grunting and yelling of the two brutes took on a more rough and grinding quality, like the sound of a landslide.

I spun around as Bert ran up to me, and I stepped aside, swinging the hammer back to clip him in the elbow.  I didn't stop, but ran forward and launched myself at Ernie, hammer in my right fist, Gram in my left.

That was when I got a good look at them.  With Gram in my hand, the glamour that hid their true appearance fell away, and I saw them for who and what they truly were.

Giants.  That's what Rolph had said.  These guys were twelve feet tall and as wide as a bus.  How they managed to fit in even a Hummer astounded me.  I leapt at Ernie, landing to his left side, and brought the hammer around.  He dodged at the last moment, and instead of catching him in the head, he absorbed the blow on his shoulder.

However, he felt something, because he stumbled away from Joe and grunted with the blow.

Bert rushed me from the rear, sounding like a freight train.  I spun, letting him come to me, and feinted with the hammer, only to bring Gram around in a short thrust, and then a quick flip of the wrist.

The blade by-passed his outstretched arm, and flicked against the side of his neck, sending a spray of blood into the cooling night.

He grabbed his throat and fell to his knees, his eyes as big as lamps.

Each step in the battle drives an emotional punch.  Sarah does not have time to think,  but acts and reacts without thinking.  She dances into combat with decisive actions and an urgent need to save the homeless man, Joe whom she's gotten to know.

Every motion is choreographed.   Each short sentence or clause raises the stakes and heightens the tension.  I treat these scenes with care, sometimes mapping out every sequence to insure that logical actions follow the one before it.

I've even gone so far as to draw maps of scenes so I can keep up with all the players.  This is especially important in the larger battle scenes that occur in each  book.  There are no limitations on the tools you can use here, just find the ones that work best for you.

Now that you understand rising tension and the use of action scenes, I think we need to look at the down beats.  There's a fine balance between rising tension and release.  This is a skill that takes much reading and practice to perfect.  You want the reader to feel their heart pounding, want their adrenaline to pump through their blood and if you are very good, they'll find themselves out of breath.  I've experienced this from high intensity action scenes.

The key is pacing.  Drive the action faster.  The purpose of short sentences is to give the reader fast bits of information so they don't have time to catch their breath.  Long languid sentences slow down the pace, letting the reader relax, calm down.  These can be just as powerful if done correctly.

What you don't want to do is totally fatigue your reader.  Rising tension and exciting action sequences are great, but if your reader has to put the book down because they can't breathe, you've gone too far.
To have a fulfilling experience, you need to let them down from time to time.  Think of it like climbing a mountain.  Rising tension is the steep climb up, but every now and again you need a small plateau to allow the reader to catch their breath.

There are a couple of very handy ways to accomplish this without letting the reader put the book down and go wash their dishes.  First use humor.  Making jokes and funny quips is a great way to release some tension.  How many books and movies have you seen with a wise-cracking hero.  Think about the movie  Die Hard.  Bruce Willis's character is in a tight spot, injured and surrounded by bad guys who have him out numbered, out gunned and hold all the hostages.

And yet, John McClane, Bruce's character, constantly uses smart ass responses and his quick wit to antagonize the bad guys and give the viewers a bit of relief from the incessant drum beat of violence.
There's no real point where John McClane is safe but we have moments where we can catch our breath and laugh knowing he has a moment's reprieve.

Then, the actions swings into full-force once again.

John McClane's antics bring us to the next way to give your readers a moment of reprieve.  Dialogue allows the readers to break up the action.  Now, again, we don't want to allow the reader to settle into complacency and security, but we can give them a chance to relax for a heart beat or two before we amp things back up.

Remember, for this to work, you need to keep the exposition to a minimum.  This is the antithesis of action sequences.  Long lovely scenes describing  bits of history or scenery are wonderful, and absolutely required to make a story or book work, but they will bring your pacing and tension to a grinding halt.

Use each sparingly, and as defined counter points to keep the story interesting and the readers turning those pages.


And one last word from our sponsors: In case you missed some of the excellent articles from the fine authors who have contributed to this series, you'll find the links to all of the previous posts below.