I've always enjoyed Peter Clines' work, finding his Ex-Heroes and Ex-Patriots to be wildly entertaining mash-ups of the post-apocalytic, horror, and superhero genres. So when I found this title on Netgalley for free, I snatched it up. It's a bit of a departure from Cline's previous work, but as a long time fan of Stephen King, I found the premise interesting. 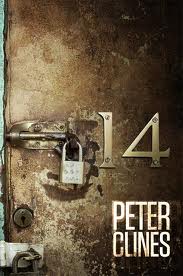 There are some odd things about Nate’s new apartment.

Of course, he has other things on his mind. He hates his job. He has no money in the bank. No girlfriend. No plans for the future. So while his new home isn’t perfect, it’s livable. The rent is low, the property managers are friendly, and the odd little mysteries don’t nag at him too much.

At least, not until he meets Mandy, his neighbor across the hall, and notices something unusual about her apartment. And Xela’s apartment. And Tim’s. And Veek’s.

Because every room in this old Los Angeles brownstone has a mystery or two. Mysteries that stretch back over a hundred years. Some of them are in plain sight. Some are behind locked doors. And all together these mysteries could mean the end of Nate and his friends.

Or the end of everything...

I think the biggest challenge to reviewing 14 effectively is avoiding spoilers. So much of the action and plot of the story is tied to its many mysteries, that to seperate them makes such examination largely meaningless. There have been comparissons to Lost and these are apt, though I also see similarities to other standout genre shows such as Sanctuary and Warehouse 13. There are secrets, both great and small in almost every aspect of the story, from the motivations of Clines' large cast of characters, to the mysteries of the Kavach building and its history. Much like Lost there is a strong current of misdirection as some mysteries that may seem important are more for flavor than any real plot movement. But the sheer amount of questions and speculation that Clines wrings from the reader are a testament to his skills as a writer.

But the mystery elements are not Clines' only strength. His characterization is the main draw. 14 has a fairly sprawling cast, and Clines gives us a very clear and detailed characterization of each. The banter between characters and the romantic subplots are handled with a deft touch.  The realism of these portrayals help ground the otherworldly and often bizarre revelations that are a result of the slow reveal of the building's mysterious purpose.

Being so familiar with the frenetic pacing of Clines' other work, the slower pace of 14 was distracting at first, but the growing suspense as more and more mysteries were answered more than made up for the slower build up. And the last third of the novel definitely stepped on the gas, delivering higher stakes and tension.

In the last fourth of the novel, things take a Lovecraftian turn, and Clines almost lost me. I've never been a big Cthulu fan, but his care in character developments kept me engaged despite my misgivings about his choice of principle antagonists. I'm glad I stayed with it, because the closing sequences were particularly satisfying for me and tease at the possibilty for further exploration of the Kavach building and its residents.

While I enjoyed Ex-Heroes and Ex-Heroes more, I can't deny that Clines knows how to tell a compelling horror story. His gift for characterization makes up for any reticence I felt with regards to other elements of the tale, and I'd definitely come back for more. If you are a fan of big mysteries, full of more questions than answers, then 14 is not a book you should miss. Clines crafts a compelling mystery, populated with characters that feel like the neighbors you wish you had. Think Friends meets The Outer Limits without the laugh track.
Posted by Unknown at 9:34 AM