Lovers of books, especially science fiction and fantasy owe it to themselves to take a look at Jim C Hines' Libriomancer. Hines manages to take the bibliophile's love of books and the omnipresent wish that genre fans everywhere express, if only we could take the wonderments of fiction and bring them into our dull and mundane world and make it the central theme of not only his magic system but of the novel itself. The result is an overpouring of love for the written word and science fiction and fantasy specifically, that practically drips from the page. Despite some minor bobbles, all but the most cynical of readers will be hard pressed not to be infected with Hines' obvious joy in telling this tale about the magic of a true and well loved book. 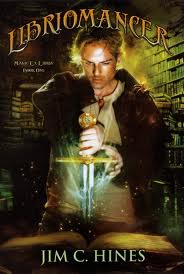 Isaac Vainio is a Libriomancer, a member of the secret organization founded five centuries ago by Johannes Gutenberg.  Libriomancers are gifted with the ability to magically reach into books and draw forth objects. When Isaac is attacked by vampires that leaked from the pages of books into our world, he barely manages to escape. To his horror he discovers that vampires have been attacking other magic-users as well, and Gutenberg has been kidnapped.

With the help of a motorcycle-riding dryad who packs a pair of oak cudgels, Isaac finds himself hunting the unknown dark power that has been manipulating humans and vampires alike. And his search will uncover dangerous secrets about Libriomancy, Gutenberg, and the history of magic...

Hines' sticks to the tried and true urban fantasy format of a first person narrator, but his choice of Isaac Vainio is inspired. Isaac is rapidly shown to be a small fish in a very large pond, full of sparkling vampire piranha. Vainio is the bumbling, earnest sort that is instantly recognizable to his intended audience. Isaac is no Harry Dresden, but his love of books and the steady stream of pop culture references make for a likeable narrator. The rest of the principle cast consists of the dryad, Lena and Vainio's pet fire spider, Smudge. The fire spider is especially well done, providing far more nuance than any reader could expect from a character with no dialogue.

The pacing is robust and the action well balanced with quieter character moments. Hines' world building is fantastic, full of in jokes about the varieties of vampires, plenty of good natured pop culture references, and interesting use of real world historical figures. The magic system allows for a lot of creative applications and Hines' showcases some ingenious choices along with ones that demand inclusion. There's plenty that will resonate with the daydreamers that have turned into voracious lovers of genre.

I had some trouble with the romantic subplot. Hines goes to fairly impressive lengths to sell the unusual situation between Lena and Isaac, and I admire his not taking the easy route given the specifics of the dryad's personal history. Isaac's hesitation is well done, but I think it could have played for a good bit longer. That being said, the romantic subplot is not so heavy handed or ill-conceived as to detract from the overall ambition and execution of the other elements. It wasn't to my tastes, but what fictional romance tickles everyone's fancy?

Hines and Vainio's love of books is the real star here. From the 'so ingeniously simple, I can't believe no has done this before" magic system, to the omnipresent references both overt and subtle to so many genre titles that there is an appendix for them in the back, to the loving depictions of archives, bookstores, and libraries, there is hardly a page where love for the written word doesn't shine through. And that is the real strength of both Hines' writing and the novel as a whole. Its none of the things that serve as the sound bites of book reviews or marketing material.  It's not cinematic, epic, grimdark, steampunk, or genre bending. Libriomancer is made of simpler and perhaps more powerful stuff than any of those handful of those labelling adjectives. It's a tale made out of youthful joy and the miraculous daydreams of genre lovers since the very first fairy tales. Which is a different sort of sound bite all together.