The Troupe by Robert Jackson Bennett

It's a pretty unusual for me to feel apprehension to review a book that I absolutely loved. But I've been putting off reviewing Robert Jackson Bennett's The Troupe for weeks. I'd read rave review after rave review, seen the novel on many "Best Of" lists, and finally decided to see what all of the fuss was about. And let me tell you, the critical buzz around Robert Jackson Bennett is well deserved. I haven't been this excited to find a new author since discovering Rothfuss' The Name of the Wind. The only thing stopping me from running out and buying American Elsewhere is because I have other books in the "to read" pile, and reviews to do. Just in case you missed it, The Troupe is fantastic. Bennett delivers a world that is, on one hand, depressingly mundane, but on the other hand, profoundly magical, filled with characters that run the gamut between achingly realistic and utterly alien. If you are a fan of a beautiful prose and stories that linger in your thoughts for days after the last page is turned, The Troupe is a must read. 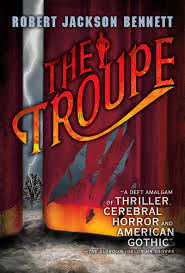 The blurb from the book jacket doesn't begin to do the story justice, but here it is for sake of brevity:

But sixteen-year-old pianist George Carole has joined vaudeville for one reason only: to find the man he suspects to be his father, the great Heironomo Silenus. Yet as he chases down his father's troupe, he begins to understand that their performances are strange even for vaudeville: for wherever they happen to tour, the very nature of the world seems to change.

Because there is a secret within Silenus's show so ancient and dangerous that it has won him many powerful enemies. And it's not until after he joins them that George realizes the troupe is not simply touring: they are running for their lives.

The Troupe is a difficult novel to categorize; it's equal parts fantasy, mystery, historical and family drama. Bennett does an excellent job of weaving the divergent elements into a cohesive tapestry. If I were forced to make a comparison, Neil Gaiman would be the only author that has a even vaguely similar style. I was reminded of Neverwhere almost immediately in all of the best possible ways.

There is a subtlety to Bennett's prose that I found captivating. There is always a sense of something stirring just beneath the surface. Even scenes that are completely devoid of traditional action vibrate with potential consequences of the revelations and decisions made within them. I was both anxious for the trials that I knew were coming and hesitant to arrive at the final destination. I knew this was no lighthearted fairy tale. The world Bennett crafts is undeniably realistic, full of hope and disappointment in equal measure.

But the heart of Bennett's, dare I say, genius, is his characters. Each and every member of the troupe is complex, and completely drawn. Even characters that are, at best, secondary to the plot, have a complete and complex story arc that adds to the resonance of the novel as a whole. From the art wise, and world foolish, George, to the irascible and gruff, Silenus, each character has an essential piece of humanity that the reader can relate to. Even the many otherworldly characters, while often almost completely alien in the viewpoints and behavior, are mere reflections of the hidden parts of both the protagonists and ourselves. These powerful connections between the art and the audience are the real magic of The Troupe.

The plot appears to meander at times, falling down rabbit holes that seem to have nothing at all to do with the overall thrust of the troupe's or George's purpose. But I quickly learned to trust Bennett's muse, as these disparate departures began to braid together with one another, producing a more powerful and realized whole. In fact, some of my favorite and most revealing scenes in the novel come from these divergences. Bennett knows that the end result is no where near as important as how you get there and the wisdom and experience you gain along the way. His characters may not realize this fact as they try to pursue their own agendas, but they all grow and change in ways both expected and completely surprising.

In conclusion, Bennett has produced a novel that defies easy description, blending elements from genre and story into a rare hybrid that can appeal to all lovers of well crafted tales. When I recommend this book in the future, as I know I will, I will take an approach I save for only the most prized books on my shelves. I'll simply ask; do you like to read?

If the answer is yes, then you should read The Troupe.
Posted by Unknown at 7:14 AM