Prince of Fools by Mark Lawrence 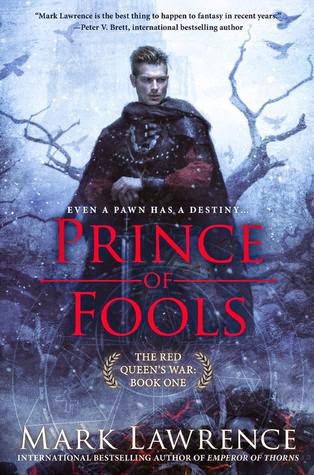 Mark Lawrence is one of those authors that I've meant to review for a long time. I thoroughly enjoyed his debut Prince of Thorns after picking it up as an impulse buy from the Science Fiction Book Club what feels like eons ago. When the SFBC didn't offer the subsequent books in the series, I allowed my OCD need to have all the books in a series in the same format stop me from reading the rest of the series. I know it's weird but I promise, I'm mostly sane. So when the first installment of his second series Prince of Fools hit shelves, I snatched it up. Then life took a turn for the busy and I stopped reading almost entirely. Fast forward almost a year, and here we are.

Prince of Fools has everything I loved about Prince of Thorns with a much more relatable protagonist than teen sociopath Jorg Ancrath, so readers with more delicate sensibilities can rest a bit easier. Lawrence's tersely elegant prose and well crafted characters are in full evidence and the world building is just as effortless as readers of The Broken Empire have come to expect. I suspect some of that is due to the connection to the previous series, Though my long gap in reading Lawrence as well as having not finished the previous series (a situation I expect to remedy in the coming months) rendered all but the most obvious connections meaningless to me. Even as a standalone, Prince of Fools is a joy to read and readers who haven't read the previous series can start here with no significant disadvantage. Just dive in and enjoy, I guarantee you won't be disappointed.