Jonathan Maberry's name has been popping up on my Twitter feed for months, so I decided to take a look at the first of his Joe Ledger series. Maberry delivers a fast paced, high tension yarn with a memorable protagonist and a compelling supporting cast. Fans of World War Z and television's Burn Notice will likely find Patient Zero right up their alley. 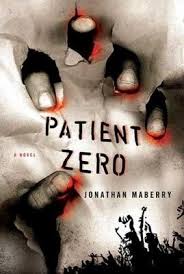 When you have to kill the same terrorist twice in one week there's either something wrong with your world or something wrong with your skills... and there's nothing wrong with Joe Ledger's skills.  And that's both a good, and a bad thing.  It's good because he's a Baltimore detective that has just been secretly recruited by the government to lead a new taskforce created to deal with the problems that Homeland Security can't handle. This rapid response group is called the Department of Military Sciences or the DMS for short. It's bad because his first mission is to help stop a group of terrorists from releasing a dreadful bio-weapon that can turn ordinary people into zombies. The fate of the world hangs in the balance....

The real selling point for Patient Zero is the voice of Maberry's protagonist, Joe Ledger. Surprisingly, Maberry chooses to write in third person rather than first, which seems to be a necessary evil since our hero never really shares screen time with the real villains of the piece. But the strength of Ledger's chapters is evident in my exasperation any time I was forced to spend too much time with anyone other than Ledger. Ledger has a lot in common with another popular suspense hero, James Patterson's, Alex Cross. But while Cross seems almost too perfect, Ledger is much more the every man in spite of being perhaps a bit too competent. But I suppose a high degree of competence is required when facing hordes of the walking dead with nothing more than a hand gun. But it's not the sheer amount of Ledger's bad-assery that makes the book, though Maberry has a deft touch with action sequences. It's his particular blend of pissed off sarcasm that really sells the character for me. Joe's a guy you'd be more than happy to have a beer or six with after work.

Ledger's fellow soldiers are cut from the same supremely competent cloth, all top-tier operators, real heart breakers and life takers to a man. But despite these similarities, Maberry manages to give just enough depth to make these characters more than simple window dressing. Only Ledger's love interest, Grace Courtland, gets enough quiet character moments to make her more than just another gunslinger. The growing attraction and eventual hook up, while inevitable, is handled with enough class and real world subtlety that it was actually a welcome change of pace from the relentless suspense and violence of the main plot thread. Maberry handles it much more deftly than I would have expected from a novel so full of machismo.

The non-combatants receive even better treatment, particularly Ledger's psychiatrist and close friend, Rudy Sanchez and the head of the DMS, the enigmatic Mr. Church. Sanchez' role as the mouthpiece for Maberry's thoughts about the nature and effects of violence on the psyche give him some of the most thought provoking bits of dialogue, and a real sense of a bystander's react, ion to the horrific nature of both the threat of the bio-weapon and the severity of the necessary response. Church is also a real standout, enigmatic, calculating and ruthless in his pursuit of the terrorist responsible for the virus. Maberry keeps Church a mystery, but allows just enough glimpses of the behind his aloof facade that readers can't help but want to learn more about the head of the DMS.

Despite the masterfully orchestrated action scenes that populate the seeming majority of the novel's pages, I felt the pacing left something to be desired. Though I suspect my own fondness for the Ledger chapters may have contributed to this view. I still believe that the space between the more active and central thread and the more minor thread featuring the antagonists and their plans could have been managed better. But it's a minor quibble really. Especially given the fact that each of the principle characters in that secondary thread are given simple yet complete character arcs. A lesser writer wouldn't have invested the space, but Maberry knows better. This secondary plot line, while not as compelling as that of Ledger and Company, is crucial enough that to hide it behind the scenes would have been criminal.

The action is gritty, rapid fire, blood on the walls violence preceded and followed by longer moments of gripping suspense and the psychological horror that is left in its wake. Maberry doesn't shy away from the trauma faced by soldiers and those who experience horror their minds are ill equipped to process. These explorations into the psyches of the characters and the questions they ask of themselves and each other were the best part of the novel for me, transforming what could have been a simple piece of 'brain candy' into something more satisfying with a far richer and more rewarding flavor. There's a better flavor of brains for this zombie novel and I definitely will be back for seconds.
Posted by Unknown at 9:03 PM