I really enjoy books that can bend genre into something entirely new. I've read several novels that manage to do this remarkably well, Robert Jackson Bennett's The Troupe and Audrey Niffenegger's The Time Traveler's Wife both spring immediately to mind. So when I read the blurb for Robin Sloan's Mr. Penumbra's 24 Hour Book Store I had high hopes that I had found another such novel, something I could recommend to my non-genre reading friends that might bridge the gap between their tastes and mine. Sadly, despite showing a lot of promise in it's premise and characterization, Sloan's novel seems to be a bit too clever for its own good and tuned out to be something of a disappointment. 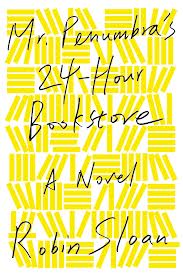 The synopsis from the publisher is as follows:


The Great Recession has shuffled Clay Jannon out of his life as a San Francisco Web-design drone—and serendipity, sheer curiosity, and the ability to climb a ladder like a monkey has landed him a new gig working the night shift at Mr. Penumbra’s 24-Hour Bookstore. But after just a few days on the job, Clay begins to realize that this store is even more curious than the name suggests. There are only a few customers, but they come in repeatedly and never seem to actually buy anything, instead “checking out” impossibly obscure volumes from strange corners of the store, all according to some elaborate, long-standing arrangement with the gnomic Mr. Penumbra. The store must be a front for something larger, Clay concludes, and soon he’s embarked on a complex analysis of the customers’ behavior and roped his friends into helping to figure out just what’s going on. But once they bring their findings to Mr. Penumbra, it turns out the secrets extend far outside the walls of the bookstore.

My disappointment aside, there are some interesting things going on in Sloan's story. The protagonist, Clay, certainly typifies the over-educated, inexperienced twenty-somethings that have suffered from the economic downturn and find themselves adrift with little sense of direction. Clay's dissatisfaction with his life's trajectory is palpable, and his decision to throw his energy into the mysteries of Penumbra's bookstore and its odd collection of clients seems like the act of a man desperate for something to grab hold of. The romantic subplot suffers from a similar sense of desperation, where Clay is content to allow Kat to run hot and cold while he simply drifts about her in a loose orbit awaiting her pleasure. It might not be the most fulfilling plot line, but the authenticity of its architecture is undeniable. The banter between the cast is easy and natural and full of pop culture references that genre readers will find engaging. As a character study, Mr. Penumbra's 24 Hour Bookstore is a success. It's only when his plot starts intersecting with his big idea, that some holes become apparent.

While going to great lengths to provide an air of mystery to the true purpose of the bookstore and the mission of Penumbra and his acolytes, Sloan fails to deliver much more than some compelling stage dressing. The puzzles are far too easily solved, with out much in the way of actual cost to any of the protagonists. The juxtaposition of ancient methodology versus the technological path is obviously the big idea that Sloan is fixated on, but that comparison, while interesting doesn't provide enough real conflict to the plot. Sloan seems to be saying why can't we all just get along, but gives little real reason that we should do so.

Sloan makes some excellent observations about the modern world's dependence on technology. For example, readers are treated to an awkward virtual date between our protagonist and his love interest, and an otherwise brilliant character cannot operate something as low tech as a copy of the New York Times. But rather than make any real statement about how technology may not be the cure all for all the challenges faced by the protagonist in his search to unlock the mysterious knowledge that Penumbra seeks, Sloan simply allows technology to provide the answer time and time again. While real paper books do play a role in the eventual uncovering of the grand mystery that Penumbra and Gannon's band of investigators, most of the riddles Sloan presents are too conveniently solved with the aid of modern technology. Dues ex machina play far to great a role in the solving of problems. Need to copy a book in a secret library with incredible security, look no further than the Internet for plans for a an easily smuggled scanner made of cardboard and portable cameras. Can't decipher the book, well why not have the vast computing power of Google at your disposal. Answers come far too easily to Sloan's cast, and because of that there is little satisfaction when the ultimate goal is achieved.

Make no mistake, Mr. Penumbra's 24 Hour Bookstore is a quick, light and ultimately enjoyable read. But with so strong a premise, I expected far more than I received. Those looking for something with a little more substance and less magical hand waving should stick to Robert Jackson Bennett and the like. There's little water beneath Sloan's albeit appealing mirage.
Posted by Unknown at 9:45 PM