The Blue Blazes by Chuck Wendig

Chuck Wendig has been on the periphery of my to read list for a while. I'll admit, I'd mentally placed him in the same category as Richard Kadrey, whose Sandman Slim I'd enjoyed, but decided against devoting anymore time to. Grindhouse urban fantasy just isn't my thing. I probably wouldn't have ventured into Wendig's fiction, if I hadn't run across a EARC on Netgalley. After deciding to give The Blue Blazes a run, I'm happy to report that Chuck Wendig has a new fan. The easiest way to describe The Blue Blazes is to imagine Sin City after doing an 8-ball of mystic cocaine. I know that makes no sense, but Wendig's blend of pulp noir sensibilities with an interesting take on urban fantasy tropes defies conventional description. Unless awesome is descriptive enough for you. 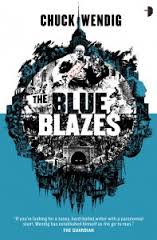 The publisher's blurb is pretty basic, but I'm including it because it echoes Wendig's writing style fairly well.

Criminal underworld? He runs in it.

Supernatural underworld? He hunts in it.

Nothing stops Mookie when he's on the job.

But when his daughter takes up arms and opposes him, something's gotta give...


Wendig's protagonist, Mookie Pearl is cut from the same cloth as other noir heroes, but the closest comparison that comes to mind for me is Warden from Daniel Polanski's Lowtown. These two are no choirboys, both violent and conflicted men with complicated histories. But unlike Warden, Mookie is actually a very sympathetic character. I wouldn't go so far as to say he has a heart of gold, but Wendig does an excellent job of showing that even the brutal and vile among us, still have families and people that they love. In spite of his violent nature, Mookie is a character that readers can cheer for. He may be a leg breaker and a poor excuse for a father, but he tries and there is value in the attempt.

The secondary cast is also well drawn, especially Mookie's wayward daughter Nora. Her tough as nails facade is deeply rooted in her psychology and Wendig does an excellent job making her far more three dimesional than she initially appears. The other denizens of Wendig's fictional New York are as varied and unique as you would expect, if a bit more outrageous in response to a world were goblins and naga prowl the streets in human guises. Between low level mobsters, roller-derby themed gang members, city maintenance workers, and an undead stunt driver Wendig keeps the cast well rounded and always entertaining.

The pacing is just short of break neck, but Wendig gives readers a well placed moment or two to catch their breath. But don't be shocked to find yourself reading well into the night. The action sequences are bombastic, brutal set pieces that leave the surrounding landscape in reduced to gleefully described rubble. It's all a hair's breadth from over the top, but Wendig manages never to lean on the gas enough to send the story into a tail spin. It's a blancing act to keep from slipping into parody  but Wendig manages it deftly.

The plotting is a bit predictable at times, but Wendig overcomes that with the character and panache of his prose, and the insightful characterization of his principle cast. I may have seen some of the concluding plot threads coming, due to Wendig's own foreshadowing, but the emotional resonance of those moments was no less palpable with foreknowledge.

As I've said, the real star of The Blue Blazes is the prose. Wendig writes with blunt force choreography, full of brutally disturbing descriptions, and wrecking ball action. Noir sensibilities are in full force here, and Wendig uses them brilliantly to craft a portrait of a New York that is at the same time instantly recognizable and disturbingly alien.  The staccato rhythm of Wendig's prose fits beautifully with the story he tells, and I've rarely seen such an usual voice used so effectively.

Fans of noir fantasy and urban fantasy with a bleeding edge should definitely explore the world of The Blue Blazes. I'll definitely be checking out Wendig's back catalog while I wait anxiously on a possible continuation of Mookie and Nora's dysfunctional family drama.