I've been a Stephen King fan, since my freshman year of high school and have read every single thing he's published with the exception of one out of print novel. When I heard about his newest novel, Doctor Sleep, I was ecstatic. Few of King's novels are as beloved as The Shining and I can't wait to read the further adventures of Danny Torrence. The cover art and publisher's synopsis below seem to indicate that we might see a return to King's horror roots with this novel. 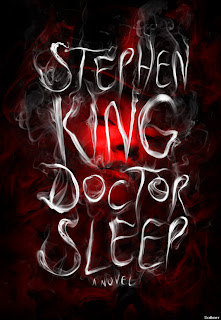 On highways across America, a tribe of people called The True Knot travel in search of sustenance. They look harmless—mostly old, lots of polyester, and married to their RVs. But as Dan Torrance knows, and tween Abra Stone learns, The True Knot are quasi-immortal, living off the “steam” that children with the “shining” produce when they are slowly tortured to death.

Haunted by the inhabitants of the Overlook Hotel where he spent one horrific childhood year, Dan has been drifting for decades, desperate to shed his father’s legacy of despair, alcoholism, and violence. Finally, he settles in a New Hampshire town, an AA community that sustains him, and a job at a nursing home where his remnant “shining” power provides the crucial final comfort to the dying. Aided by a prescient cat, he becomes “Doctor Sleep.”

Then Dan meets the evanescent Abra Stone, and it is her spectacular gift, the brightest shining ever seen, that reignites Dan’s own demons and summons him to a battle for Abra’s soul and survival. This is an epic war between good and evil, a gory, glorious story that will thrill the millions of hyper-devoted readers of The Shining and wildly satisfy anyone new to the territory of this icon in the King canon.


But wait, King also has a new release coming from Hard Case Crime, who published The Colorado Kid several years ago. The art and vague synopsis leave me cold, and I think Hard Case should probably consider giving more detail on their releases. But with a marquee name like King's they know the book will sell. Completists like me will definitely be forking over the funds regardless of the lack of details. 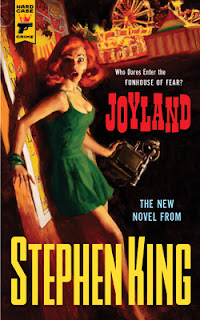 Set in a small-town North Carolina amusement park in 1973, Joyland tells the story of the summer in which college student Devin Jones comes to work as a carny and confronts the legacy of a vicious murder, the fate of a dying child, and the ways both will change his life forever.


Which of the release from America's Master of Horror are you most excited about? Would more information on Joyland make your decision easier to make? Let us know, in the comments.
Posted by Unknown at 6:51 PM