When I first started this project, I reached out to all of the authors I have interviewed since the blog started and asked them if they would like to contribute. But with that number being fairly low in comparison to the number of topics I'd hoped to cover, I also asked that they invite any other industry professionals that they thought might like to contribute. Stina Leicht was kind enough to connect me with not one but two other authors who had already made my 'to read' list. Teresa Frohock was one of those. With NaNoWriMo and various other projects and obligations kicking my butt at the moment it make take a while for me to get to Miserere: An Autumn Tale, but based on the sample chapters available on Night Shade's website and what an absolute pleasure Teresa was to work with on this project, I will definitely find the time sooner than later. 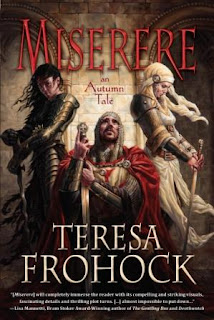 About the Author: Teresa Frohock is the author of Miserere: An Autumn Tale and is currently concluding work on a second novel, tentatively entitled THE GARDEN, which is unrelated to the Katharoi series. Teresa was raised in North Carolina, lived in Virginia and South Carolina before returning to the Piedmont, where she currently resides with her husband and daughter. Teresa has long been accused of telling stories, which is a southern colloquialism for lying.

With our author introduced and her bona fides established, lets see what Teresa has to say about the most seemingly mundane and often foolishly avoided  aspect of writing in speculative fiction; research.


A quick disclaimer: I know this is intended to be a 101 how-to; however, I’m going to assume you already know that you need to research things like how many miles a person can walk in a day or how fast a horse can run, etc. I’m not going to insult your intelligence (or mine) like that. Instead, I want to focus on research in a slightly different vein.

Story, characterization, and a strong plot are the true backbone of your work, a series of bold lines, if you will. Solid research gives your fiction a deeper pigmentation and enables you to show character development in order to intensify the realism of your fiction. The trick is not to bombard your reader with useless information.

If you can develop the knack for weaving your research into the story seamlessly, then a well-researched novel is going to give you an edge that others lack. So, how do you do that? Consider this exchange from Patrick Rothfuss’ The Name of the Wind:

“I don’t want iron,” the innkeeper said. “A drab has too much carbon in it. It’s almost steel.”

“He’s right,” the smith’s prentice said. “Except it’s not carbon. You use coke to make steel.

The innkeeper nodded deferentially to the boy. “You’d know best, young master. It’s your business after all.


This passage clicked with me because in my current novel, my protagonist Guillermo is a blacksmith. I originally intended a scene with Guillermo working in the forge, and in order to understand the process of making steel, I did quite a bit of research, whereupon I learned the following: steel is comprised of several alloys, carbon being the most important and coke is a fuel with a high carbon content.

Knowing these two things, I saw how Rothfuss divulged some important information about the innkeeper to any of his readers who also happened to know these facts.

First, the innkeeper is knowledgeable about process of making steel, something beyond most laymen in a medieval society. No two blacksmiths worked metal exactly alike and they guarded their processes jealously—think trade secrets and you’ve got the right idea. The smith’s apprentice, who should understand the process better than an innkeeper, knows that coke and lime make steel, but he doesn’t understand why (i.e. because coke produces carbon).

Because, like the innkeeper, I know these things, then I realize the smith’s apprentice is kind of dumb and the innkeeper is more than he seems.

See what Rothfuss did there?

The preceding analysis rolled through my mind in the few brief seconds that it took me to read the exchange between these two characters. For those in the know, that very tiny exchange rendered quite a bit of information about the innkeeper and the smith’s apprentice, but Rothfuss also took into account that many people wouldn’t know the carbon/coke references. For those people, the exchange was so brief as to be a quick side-trip in a very serious discussion.

And that is precisely how to entwine research into your story to enhance characterization and deliver important information to your reader without pages of useless facts. Rothfuss uses his research to enrich his story, not overwhelm it.

So then the question becomes: How much information is too much information?
Here’s the deal: you’re telling a story, not writing a treatise. There is a big difference between these two things, and in fiction, it is necessary to relay a fact as expeditiously as possible.

The issue is to weave the facts into the story without breaking the rhythm of the prose. For me, this takes practice and numerous edits, but once I hit that right mix of prose and fact, the story simply sings. Your number one rule should be that any research that you relay to the reader should be tied directly into the immediate events in the story.

Research into Iberian military practices gave me the information I needed to construct the break between Tomás and Guillermo in THE GARDEN. By knowing that a strict table of fines and punishments were set out for soldiers’ infractions during a war, I could easily weave the fine of four hundred maravedís for killing a señor during a conflict into the discussion between Tomás and Guillermo.
My example:

“You’ve dishonored yourself.” Tomás’ whisper was a hiss. “And me.” The rain did not cause the water in the older man’s eyes.

Guillermo didn’t drop his gaze. “Vicente gave the insult.” Why, for once, couldn’t Tomás take his side?

“He was your superior! You think you are better than him? As good as him?” Tomás’ gauntleted fist struck Guillermo’s chest, just over his heart. The steel ripped his gambeson and tore into his flesh. “Why can’t you accept your place in this world?”

“Shut up. He’s dead, Guillermo. It is four hundred maravedís for killing a señor during a conflict! Do you have that money?”

“You know I don’t.” Neither of them had to articulate what would happen if the fine wasn’t met. Guillermo remembered the caballero’s shrieks as the lash had shorn his back into shreds.

“No!” Tomás’ eyes blazed. “You will let me handle this. I will talk to Don Flores. We can offer the smithy, but you must come back and accept responsibility. You can work the debt off in Vicente’s household. It’s a matter of honor, Guillermo.”


I don’t need to go into a great deal of detail about the rank of a royal señor or what is considered honorable conduct. Tomás lays it all out brilliantly for me, and Guillermo’s refusal to take responsibility for his actions gives me the impetus I need for Tomás to walk away from him. This exchange also enables me to show the reader that Guillermo has something of a superiority complex and I get to highlight the generational gap between Tomás, an older man who is a staunch royalist and good soldier, and Guillermo, someone who is looking out for number one.

I don’t have to lay out the entire table of military codes for the reader, or give the exchange rate on the maravedís. The reader can infer that four hundred maravedís is a lot of money, because Tomás is willing to put up his smithy in place of the money. The primary focus on this section is not the factual details, but the story: Guillermo has done a very bad thing, he is in way over his head, and Tomás is willing to give up his livelihood to save his life. The factual details—the murder of a royal señor, the maravedís, working the debt off in the family’s household—simply add layers and texture to the interplay between these two men.
So how do beginning writers know when you’ve got too much information? The best thing to do is write the scene or chapter with all the information embedded in the text. Sometimes I do that just to cement the details in my mind. Then wait a few days (or weeks) and go back and reread the section. If at any point, the explanations overshadow the story or the action—for example if you have three lines of dialogue followed by three paragraphs of exposition—then you’ll want to trim the exposition until you’ve whittled away the extraneous material. Once you’ve eliminated the superfluous information, start looking for places where you can work the facts into the dialogue and the action of a scene.

This is a definite case where less is always more. Two or three subtle facts—the texture of the clothing, the coinage, or even utilizing a colloquial term for a mundane object—can enhance the realism of a story. Start watching how other authors interweave their research in their stories and note when they do it well and when they don’t, then practice.

That is what all good storytelling is about—practice.