Review of the Week: Cycle of the Werewolf by Stephen King

With NaNoWriMo currently kicking my butt, I've found it hard to find the time to read let alone post a review. But since I promise one review a week, I went looking for something short to read and found something that I had been meaning to add to my collection for a while at a used book store while on a visit to Nashville. Stephen King has always been a favorite of mine, and I've read almost everything in his considerable body of work. Cycle of the Werewolf has been one of the holdouts, and I'm glad to report that despite its relatively short length, barely 100 pages, it's definitely worth the read. Adding to the presentation are the fantastic illustrations by Bernie Wrightson, best known for his work on DC Comics Swamp Thing. 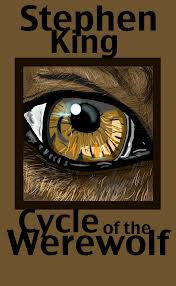 Cycle of the Werewolf is the story of the small town of Tarker's Mills and the series of werewolf attacks that plague its citizens over the course of a year. King divides the larger story into twelve smaller short stories, one for each of the months of the year. It is reminiscent in structure to the much more popular The Green Mile, which was released in a similar format but with more significant content in each section of the story.

The first few chapters center on the victims, where King does an excellent job letting us slip into these characters' hearts and minds just moments before their grisly demise. These doomed townspeople are shown to be meaningful and at times you'll find yourself feeling sorry for the lives they have endured, or secretly pleased that they've gotten their just deserts.

We also learn about Tarker's Mills through the seemingly insignificant details scattered throughout the short chapters. King is a master of short stories, able to paint a vivid and meaningful scene in very little space. He wastes no words, often making phrases and descriptions pull double and triple duty addressing character, tone, and theme at the same time.

The werewolf meets his nemesis on July 4th in the form of a paraplegic boy, Marty Coslaw. Marty narrowly escapes being the monster's latest victim and is the first to confirm the rumors that a monster is terrorizing the town, rather than some deranged drifter or local psychopath. Not that anyone takes his account seriously, and he is left to fend for himself. When he discovers the creature is a well respected member of the community a few months later, he concocts a plan to rid Tarker's Mills of the monster for good.

Cycle of the Werewolf is not a complex story, the plot is basic and has very little of the twists and turns of King's longer works. But King's mastery of character and tone make it a work worth reading to anyone who enjoys a well crafted short story. Each 'month' chronicled in the larger arc has something to recommend it, and the way King builds tension, pathos, and setting layer by layer as we move closer to the inevitable confrontation between Coslow and the werewolf is a masterclass on how to do a lot with a little. The price is high, given the amount of actual content, but it is well worth picking up at a used bookstore. King has been awarded the prestigious Medal of Distinguished Contribution to American Letters and while Cycle of the Werewolf is not his most prestigious or familiar work, even in this more obscure and admittedly thin volume you can catch a glimpse at what makes him one of the most popular and celebrated authors in recent history.

Email ThisBlogThis!Share to TwitterShare to FacebookShare to Pinterest
Labels: Horror, Review of the Week, Stephen King