Review of the Week: Spellwright by Blake Charlton

Blake Charlton has a rather unusual pedigree. From the author profile of his debut novel, Spellwright, we learn that he has served as an English teacher, a technical writer, a learning disabilities tutor, football coach and is a medical student at a prestigious university. Needless to say this is a group of somewhat disparate career choices, especially when considered under the light of his severe dyslexia. But, as with most writers, his varied life experiences have served him well in his latest career as a novelist. 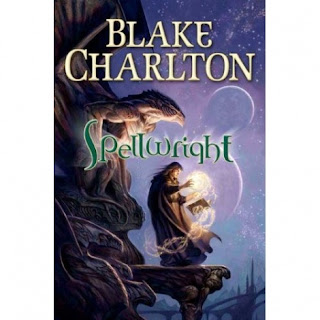 Spellwright is the story of Nicodemus Weal, a young spellwright who was once thought to be a prophesied hero that would protect humanity against the return of an ancient and evil god. Spellwriting uses magical texts written by the caster in his own flesh to accomplish a variety of spell-like effects. Spellwrights can also create constructs akin to golems and gargoyles with the same magical scripts. Complicating Nicodemus' use of his magical talent is his cacography, a form of magical dyslexia that causes him "to misspell" not only the texts he creates, but any text he comes into contacts with, often to disastrous result. Nicodemus seems destined to remain an apprentice at the magical university at Starhaven for the rest of his life, or have his magic censored from his mind. His mentor, the blind Master Shannon, has other ideas believing that Nicodemus can overcome his disability. But when one of Shannon's rivals is killed and his mentor is investigated for the murder, Nicodemus finds himself at the center of a mystery with ties to prophesy, political intrigue, and the machinations of gods and demons alike.

The hero of prophecy is definitely a familiar theme, especially to anyone who grew up reading the fantasy of the late eighties and nineties. While there is a resurgence of these themes in the works of authors such as Peter V. Brett, Michael J. Sullivan and Brandon Sanderson, Spellwright feels less like these more contemporary works and more like those of Eddings, Feist, and Tad Williams, largely due to very clear lines drawn between the heroes and their enemies. Those looking for a story populated by the morally gray characters found in George R.R. Martin or Joe Abercrombie's work should look elsewhere. Which is not to say that Charlton's characters are two dimensional because they are not, they are simply good or evil.

One of the best things that Charlton does to differentiate Nicodemus from the glut of prophesied saviors so common in the genre is to make the use of his considerable magical gifts complicated by his cacography. The real heart of this story is about Nicodemus' coming to grips with and in some cases using his disability to his own advantage. Charlton's own personal experience with dyslexia give Nicodemus' struggles the weight of authenticity and make for a story significantly removed from the boy heroes of the novel's ancestors. Nicodemus wants to be free of his cacography and is willing to take foolish risks to do so, even though in his heart he knows that cacography is an important part of who he is. Nicodemus' journey to find his own identity and place in the world is more than engrossing enough to keep the reader turning pages, but Charlton also involves the character in an age old conflict with powerful demonic forces which provides for the action and intrigue elements necessary to move the plot forward.

Fans of detailed magical systems that have a real impact on the world around them, like those of Brett and Sanderson, will find much to like in Spellwright. However, Charlton's system of spellwriting is far less intuitive and seems almost mathematically complex which requires a great deal of explanation early on in the novel. The weight of that exposition slows down the pace of the beginning of the novel and may take more than a little time to wrap your head around the concepts, but once that is accomplished, the pace improves dramatically. Spellwriting is very flexible and Charlton uses it in some very inventive and cinematic ways that allow for some excellent action sequences in the latter half of the novel. With the necessary explanation out of the way, I am confident that Charlton's subsequent novels will have a more fluid and organic pace.

While Spellwright definitely has many of the earmarks of epic fantasy, the opening volume only hints at the grander scale of the genre. The cast of characters is small, the setting of Starhaven fairly closed, and the conflicts are fairly immediate and localized, but there are definite hints that the scope of the series will expand in the next volume. Charlton does an excellent job of hinting at the greater conflicts and the true scope of the world without taking long detours into things that only tangentially affect the main plot. As the story moves from the confines of Starhaven in the last third of the novel, the story gains speed and a sense of scope that is far from obvious from the rather confined beginnings.

While there is a definite feeling of the author getting his balance, Spellwright has plenty to recommend itself. Its inventive magic system, truly likeable protagonist, and Charlton's willingness to breathe new life into old tropes should please all but the most jaded of fantasy readers. If you long for a return to the fantasy of your youth and want a hero you can pull for with zero reservations then you should definitely spend some time with Nicodemus Weal.
Posted by Unknown at 6:02 PM