Orbit has just released a first look at one of my most anticipated debuts of 2013. Promise of Blood by Brian McClellan is just the sort of tale that I am always on the prowl for. McClellan's novel has interesting premise, a mash-up of  firearms and sorcery, with a hearty dash of political intrigue and mystery. Add in the fantastic cover art, with an interesting twist on a genre trope and I'm practically salivating. With a blurb from Brent Weeks, whose The Blinding Knife has been my favorite release this year, I really have no choice but to give Promise of Blood a pass to the top of my most anticipated debut list. Check out the cover and blurb below. I've included Week's endorsement as well. 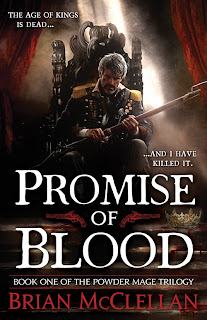 Field Marshal Tamas has staged a coup against the king of Adro. His powder mages have slaughtered the king’s Privileged cabal of sorcerers and the nobility has been rounded up to face the guillotine with their king. Tamas has brought revolution to his country in one bloody night to save his people and right the wrongs caused by the old regime. Yet his actions have far-reaching consequences of which no reasonable man could have conceived, and the king will prove the easiest obstacle to overcome in his quest to free Adro.

Captain Taniel Two-shot is a powder mage of considerable skill. Gunpowder makes him stronger and faster than other men. He can manipulate its properties to shoot out a man’s eye at twice the length of a battlefield. It makes him perfect for killing the old Privileged sorcerers with their destructive magic. One of those Privileged has escaped Tamas’ cull. The problem is, she’s stronger than any sorcerer Taniel has ever seen, and the mercenaries sent to help him track her are of dubious reliability.

When Adamat is summoned to the palace in the middle of the night, the last thing the veteran investigator expects is to arrive during a regime change. His new employer is none other than the man responsible for overthrowing the current government and he has some unfinished business with the king’s sorcerers. The dying Privileged cabal has left the Field Marshal with a riddle. It could be nothing, but Tamas does not like loose ends. Adamat knows from long experience that one doesn’t ask questions unless one is willing to learn–and believe–the answers. To add to his problems, the Field Marshal isn’t the only one interested in the answer to the dying sorcerers’ riddle. As enemies emerge from the shadows and the investigation takes a disturbing turn, Adamat must decide where his loyalties lie.


“Promise of Blood is a hugely promising debut. Guns, swords, and magic together? What more could you want? How about tense action, memorable characters, rising stakes, and cool, cool magic? Not only the finest flintlock fantasy I’ve read, but also the most fun. Brian McClellan is the real thing.”

So who do I have to kill to get a review copy of this one?