Review of the Week: The Dirty Streets of Heaven by Tad Williams

I covet review copies. As a fledgling blogger, I had dreams about boxes of new releases arriving at my house free of charge of ARC's cluttering my already full bookshelves. Well reality and dreams rarely have much in common, and I quickly learned that it takes quite a while to build a reputation and the contacts necessary to start receiving books to review from the publisher. So I soldiered on, read the books I could afford and posted my thoughts. It's been great fun and rewarding to get to know some of the authors that I admire and to begin to be a part of the community of bloggers and reviewers. A few weeks back, I was shocked to find a message from Tad Williams asking to send me a review copy of his newest book. Tad wrote one of the first epic fantasy novels I ever read, The Dragonbone Chair and was instrumental in cementing my love for the genre. But I must confess, everything I read of Tad's post To Green Angel Tower left me cold, and I eventually stopped reading him. Some of that was my own personal distaste for anything even remotely sci-fi (Don't worry, I out grew that) which made his multi-volume Otherland series something I just wasn't interested in. I read War of the Flowers as well, but it didn't gel for me either. When I first heard about the premise of The Dirty Streets of Heaven with it's earthbound angels serving as celestial attorneys for the recently departed, I was intrigued. It sounded fresh while similar to Jim Butcher's Dresden Files, a series that I burned through like a crack addict a few years back. But I was unsure about it, having had mixed opinions on Williams' work. So I purchased other books, promising myself I'd check reviews and pick it up later if they were favorable. Tad's message promising a review copy of course moved his novel to next on the pile. 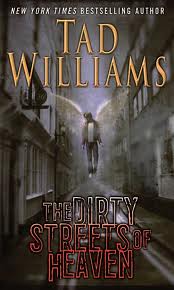 Life got in the way a bit, and it took me a little longer to finish the book than I would have liked, but I'm so glad Tad sent me that message. The Dirty Streets of Heaven is a must read for all fans of Urban Fantasy, especially fans of Harry Dresden. Williams combines a startlingly fresh concept and a relatable, yet flawed protagonist and then surrounds him with a supporting cast of offbeat misfits in typical Tad Williams style. Top it all off with gun-battles, car chases, celestial politics, suspicion and frequent flirtation with spiritual philosophy and you have a definite A-list entry into the urban fantasy milieu.

The Dirty Streets of Heaven follows the story of Doloriel, known to all but his heavenly employers as Bobby Dollar. Dollar is an angel, inhabiting a human body and serving the Most High as an advocate, arguing against the representatives of Hell to decide whether souls ascend to Heaven or find themselves in eternal torment. When a respected citizen of San Judas unexpectedly commits suicide, Bobby is assigned to be the man's advocate. What seems to be a fairly straightforward case, quickly becomes a deadly mystery with Bobby at its center. The man's soul is missing, and neither Bobby's superiors in heaven or his demonic adversaries know where it has gone or why. And this is not the last soul to vanish, raising the stakes all the more. Add in an age old, nearly unkillable monstrosity that is suddenly stalking our hero for reasons unknown and Bobby has his hands more than full.

One of the strengths of The Dirty Streets of Heaven is the voice of its protagonist. Considering that any urban fantasy story with a male protagonist is going to face the unavoidable comparison to the 800-pound gorilla of the genre, Harry Dresden, I think Williams has something special in Bobby Dollar. Dollar is at once everything we expect; sarcastic, a ladies man, but unable to form any lasting bonds with anyone of the opposite sex. But he's an angel which comes with its own set of expectations, and Bobby meets none of them. He has no wings or flaming sword, would rather hang out with his fellow advocates at the bar than do any actual work, and is openly critical of his heavenly masters. Oh and all of those things that make him a typical urban fantasy hero don't fit very well either. For an angel, Dollar seems, well, rather weak. He battles demons with wits, fists, and bullets. No excessive displays of heavenly might, or smiting the souls of the wicked going on here. At first description, it may seem dull, but it is the secret to the character's success. Bobby's resemblance to the reader, his humanity, is what makes him such a remarkable protagonist and Williams never shies away from it.

Williams also populates the story with a memorable supporting cast. Standouts include, a chronically Caucasian who talks like a gangster rapper and desperately wants to be Dollar's wingman (no pun intended, I promise), a were-pig who can only carry on a conversation while in porcine form, who serves as the intel-specialist in the investigation, and Sam, a fellow advocate who has shares a surprising history with our protagonist. But the breakout star is Caz, a demoness who serves as Bobby's principle love interest. She steals every scene she's in with mercurial moods and ferocity, but Williams wisely adds surprising depth by fleshing out her back story, making her just as human as Bobby. Some readers may be bothered by the sudden change in her perceived character after this revelation, saying it weakens her as a character, but I disagree. I found her more believable and sympathetic afterwards, as I have known many women who have responded in similar fashion. The seemingly doomed romance between angel and demon seems to be here to stay and I am looking forward to more of Caz in the projected sequels.

The world building that was such a integral part of Memory, Sorrow, and Thorn may seem to be missing in The Dirty Streets of Heaven, but I would say that Williams' has elected to paint this setting in more subdued strokes here. Heaven, like the angels, are not what one might expect. Sure everything is full of radiance and happy feelings, but the resemblance to corporate hierarchy in the day to day operations of Heaven may be jarring to some readers. This is not the Heaven that religion promises, especially since most of the rank and file inhabitants seem more like ghosts that have drank liberally of the celestial Kool-Aid. Williams; Heaven is subversive and definitely prompts more disturbing questions than anything else in the novel. There is a sense that there are leviathans swimming just below the surface of Bobby's home away from home. Williams seems content to leave almost all the specifics of heaven to our imagination, through the fact that Bobby's memories of Heaven are misty and vague whenever he returns to Earth.

The pacing is fairly standard for an urban fantasy novel, with short chapters that propel us along with plenty of surprises and problems to distract Bobby from his task to solve the mystery of the missing souls. There is paranoia and suspicion a aplenty, and while I won't say I didn't see some of the revelations coming, I was never disappointed by the results. Bobby seems poised for many more adventures, and there are just enough loose plot threads left dangling that I need to know the answers. Much like the Dresden Files, I feel that the story will only become more complex, and the world more detailed as we follow each subsequent adventure. Williams has the makings of series that could challenge the seeming supremacy of Butcher's eponymous hero.   More the merrier, indeed.
Posted by Unknown at 11:55 PM