Review of the Week: Tomorrow the Killing by Daniel Polansky

The sophomore slump is a common term in the music world. Often an artist rushes a second album in an attempt to cash in on the success of a well-received debut. The rushed work is rarely as strong as its predecessor. Writers aren't immune to this phenomenon, though the longer production time usually prevents it from being as common. One need only look at reviews to the sequels of highly acclaimed debuts of such standout titles as Patrick Rothfuss' The Name of the Wind to prove my point. Daniel Polansky's debut, Low Town, left me hungry for more of his genre bending setting, his complex and troubled narrator Warden, and most of all for the gritty beauty of his prose. So when I received my review copy of Tomorrow the Killing, I will admit to feeling a mix of excitement and trepidation. What if Low Town was a fluke, a perfect storm of engaging premise and startling choice of protagonist? Now that the newness of the premise and characters has worn off, will this newest installment fall short of the high expectations of Polansky's debut? 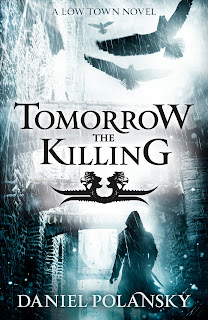 Tomorrow the Killing answered all of my fears with a resounding no. Polansky more than avoids the sophomore slump, delivering a sequel that builds upon the strengths of its predecessor but delivers even an even more complex and engaging plot, more compelling character study, and a surprising amount of compelling back story about the protagonist, Warden, all delivered in Polansky's sparse yet elegant prose.

Set three years after the conclusion of Low Town, Tomorrow the Killing retains most of the elements of the previous story. Warden is still a low level crime lord and drug peddler with a penchant for sampling his own wares far more than is healthy. He still owns a half share of the Staggering Earl, with the even tempered war hero Adolphus, and still serves as a mentor of sorts to the former street urchin, Wren. When General Edwin Montgomery's daughter disappears into the slums of Low Town on a mission to find those responsible for the decade old murder of her brother, Roland., he knows there is only one person who can find and return his wayward child before she suffers the same fate as her brother. Having served with both the General and his son during his time as a soldier, Warden finds himself drawn into a confrontation between   powerful forces despite his numerous attempts to disengage from both the dangerous storm that is brewing in Rigus and his own inconvenient conscience.

Polanksy alternates between the present day story line of Warden's investigation into the whereabouts of General Montgomery's daughter and flashbacks to his time as soldier, fighting the Dren miles from his homeland. We learn more about the infancy of his friendship with Adolphus, and his relationship to the General's murdered son Roland, who was one of Warden's commanding officers. While the fleshing out of our protagonist's backstory is certainly more than welcome, it is absolutely not a matter of Polansky adding filler material. Warden's history informs the present day as it becomes apparent that the Veteran's Association, that Roland Montgomery championed before his untimely and mysterious death, is mobilizing its members to protest a tax on their hard earned benefits and may hold the key to the fate of missing Montgomery girl. Complicating matters is Adolphus' growing involvement with the leadership of the Veteran's Association who have asked him to take part in their protests against the crown. Even Wren is drawn into their web through his growing admiration of his adoptive father, complicating Warden's attempts to keep his growing magical abilities under control and far from the grasping hands of the Empire.

These flashback chapters are some of the best in the novel. Polansky paints a harrowing picture of war, with not an ounce of nostalgia or glorification. Incompetence, illness, and long hours spent cold in the rain and mud before the crash of arms are the order of the day. Warden is never painted as a hero, not in his own mind any way, and he even goes out of his way to avoid recognition for a moment of supposed heroism. This is in direct contrast with the self-aggrandizement and rose-colored memories of the Veteran's Association and Adolphus. This unflinching approach to one of the genres most utilized topics reminds me of nothing so much as Clint Eastwoods's masterful final word on the American western, Unforgiven. Lovers of Joe Abercrombie's or Glen Cook's novels should definitely give this book a look.

Various criminal elements as well as members of Warden's former employer, Black House, also make appearances. True to form, Warden shrewdly plays the various factions against each other, making him a target if his manipulations are discovered. The political machinations at work in the plot also give Tomorrow The Killing a much larger sense of scope as Warden is dealing not just with the problems of the his own neighborhood but those of the Empire. The stakes are higher, the enemies more numerous, and in some cases all but faceless. Warden is in over his head, and struggles against forces that tax his considerable intelligence and cunning to levels even he cannot imagine.

Polansky seems to be taking steps to make Warden a somewhat more sympathetic protagonist this time around. While his gallows humor and propensity for violence and cruel sarcasm are very much intact, his drug use, while still present, is far less prevalent. A growing focus on his personal relationships particularly with Adolphus, also paint him in a more favorable light than the more introspective narrative of Low Town. While Warden may not view himself as redeemable, feeling the weight of his past sins and current situation are too vast for any hope at redemption, the readers may catch glimpses of the inherent goodness of his character that he drowns with drugs, violence, and risk taking.

As in Low Town, Warden often misjudges his enemies capabilities and suffers for his arrogance, adding high stakes and even higher tension to the latter half of the novel. The reversal at the end of the novel is far better than the one at the end of Lowtown. While there are plenty of reasons for readers to suspect things are not as they seem, Polansky manages not to telegraph his intentions, resulting in a far more satisfying ending.

Polansky's writing is top notch, as expected. The pacing is tight, keeping the reader engaged despite the frequent detours into the past. In fact, the flashbacks provide readers a chance to catch their breath and always furthers the plot in some way. The prose remains packed with the weary wit and bitter sarcasm that makes Warden such a memorable protagonist. Underneath is a stark beauty hinting that some part of our narrator has managed to stay untouched by his life of savagery and disappointment. I have small hope that Warden may eventually find peace if not happiness at the end of the Low Town tales, but my hopes for Polansky's future in the genre are anything but small.
Posted by Unknown at 6:58 PM