Daniel Abraham is one of the most prolific writers in speculative fiction. His partnership with Ty Franck under the pseudonym James S.A. Corey has produced the widely acclaimed Leviathan Wakes and Caliban's War, with the third volume Abaddon's Gates coming soon. The duo also have an upcoming Star Wars novel featuring Han Solo in the works as well. For those of you who prefer fantasy to science fiction, Abraham has The Dagger and the Coin series, which has been one of the best received new fantasy series in recent years. The cover and blurb for the third installment in this excellent series has just been released with a projected publication date of May 2013. 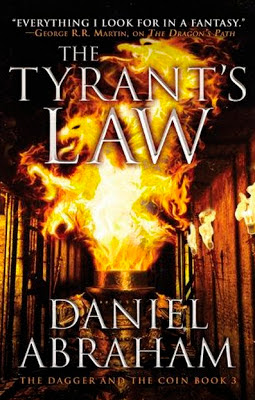 And here's the blurb:

The great war cannot be stopped.

The tyrant Geder Palliako begins a conquest aimed at bringing peace to the world, though his resources are stretched too thin. When things go poorly, he finds a convenient target among the thirteen races and sparks a genocide.

Clara Kalliam, freed by having fallen from grace, remakes herself as a "loyal traitor" and starts building an underground resistance movement that seeks to undermine Geder through those closest to him.

Cithrin bel Sarcour is apprenticing in a city that's taken over by Antea, and uses her status as Geder's one-time lover to cover up an underground railroad smuggling refugees to safety.

And Marcus Wester and Master Kit race against time and Geder Palliako's soldiers in an attempt to awaken a force that could change the fate of the world.


I haven't read The King's Blood yet, but this blurb is going to have me waiting at the mailbox for its arrival. It looks like 2013 might be Daniel Abraham's best year yet.