Review of the Week: Trapped by Kevin Hearne

Most people would call Kevin Hearne's The Iron Druid Chronicles a kind of Harry Dresden lite. A less filling, tastes great kind of proposition, if you will. Initially, I would have agreed with such a comparison, but not any more. With the fifth installment of the series, Trapped, I am convinced that Atticus O'Sullivan is much more than Dresden's slightly goofier cousin and that those earlier comparisons were nothing more than a convenient pigeon holing on my part. 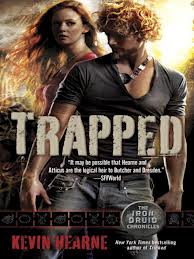 After twelve years of secret training, Atticus O’Sullivan is finally ready to bind his apprentice, Granuaile, to the earth and double the number of Druids in the world. But on the eve of the ritual, the world that thought he was dead abruptly discovers that he’s still alive, and they would much rather he return to the grave.

Having no other choice, Atticus, his trusted Irish wolfhound, Oberon, and Granuaile travel to the base of Mount Olympus, where the Roman god Bacchus is anxious to take his sworn revenge—but he’ll have to get in line behind an ancient vampire, a band of dark elves, and an old god of mischief, who all seem to have KILL THE DRUID at the top of their to-do lists.

In that brief synopsis is found the secret to Hearne's success. The blending of countless mythologies into a cohesive mythology to serve as the backdrop to a high octane thrill-ride full of chases, classic sword and sorcery, and bucket loads of side splitting humor set the Iron Druid Chronicles into a class all their own. Some might say that Butcher did it first, but I think that Dresden is far more serious and relies more on the tropes of the pulp detective novel than Heare's Atticus. It's the lighter touch that separates the two, and Trapped is a worthy addition to the series.

While both Butcher and Hearne revel in placing their protagonists in nearly impossible predicaments against overwhelming odds, Hearne's series lacks the sense of darkness that is all but omnipresent in Butcher's work. There is a sense of optimism that permeates not just the character of Atticus but all of the supporting cast as well. I believe that is because Hearne's intentions toward his hero are different. Harry Dresden always manages to emerge victorius from his battles, but there is a much heavier sense of consequence. Atticus may face consequences for his actions but they never seem to have enough weight to burden his soul. I believe that is because of the strong and largely uncomplicated relationships he has with his supporting cast. Granuaile is an excellent example of this. While very similar to Dresden's teacher/apprentice relationship with Molly Carpenter, Hearne eventually allows this subplot to reach its natural maturity and in less than a third of the time. This allows Atticus a measure of real world happiness that lightens the mood of the series significantly.

Both series have a similar mythology blending elements of the supernatural with religions and dieties from other cultures. While Butcher usually focuses on a relatively small number of elements per novel, Hearne's stories seem to be more a free for all. All of this gives Hearne's stories a more frentic pace but a certain lack of depth to the setting. The pacing is tight and the story moves ahead at a clip full of chases, battles and reversals that keep the reader engaged.

Long term readers will doubtlessly enjoy this most recent addition to The Iron Druid Chronicles. Hearne delivers another fast paced, humorous yarn, with several long awaited resolutions and a changing of the status quo that will propel the series forward in new dirrections. For those who have yet to give the series a try thinking it a 'poor man's Dresden Files', I strongly reccomend that you give Hearne a chance on his own merits and set aside the convienent comparisons.