Review of the Week: Scourge of the Betrayer by Jeff Salyards

Jeff Salyards' debut novel Scourge of the Betrayer has drawn a lot of comparison to Glen Cook's Black Company novels. His brooding and unflinching tale of a feared group of mercenaries is reminiscent of genre standouts such as Joe Abercrombie and Mark Lawrence. In less than half the size of most fantasy novels, Salyards delivers a story that is packed with bloody action, political intrigue, gallows humor, and truly compelling characters while showing only the tip of the iceberg in the opening volume of the series. Readers who enjoy their heroes dark and the stakes dire should definitely add Salyards to their must read list. 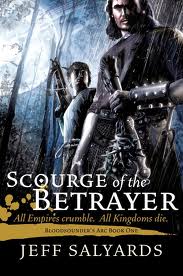 Here's the blurb from book jacket:


Many tales are told of the Syldoon Empire and its fearsome soldiers, who are known throughout the world for their treachery and atrocities. Some say that the Syldoon eat virgins and babies-or perhaps their own mothers. Arkamondos, a bookish young scribe, suspects that the Syldoon's dire reputation may have grown in the retelling, but he's about to find out for himself. Hired to chronicle the exploits of a band of rugged Syldoon warriors, Arki finds himself both frightened and fascinated by the men's enigmatic leader, Captain Braylar Killcoin. A secretive, mercurial figure haunted by the memories of those he's killed with his deadly flail, Braylar has already disposed of at least one impertinent scribe . . . and Arki might be next. Archiving the mundane doings of millers and merchants was tedious, but at least it was safe. As Arki heads off on a mysterious mission into parts unknown, in the company of the coarse, bloody-minded Syldoon, he is promised a chance to finally record an historic adventure well worth the telling, but first he must survive the experience! A gripping military fantasy in the tradition of Glen Cook, Scourge of the Betrayer explores the brutal politics of Empire-and the searing impact of violence and dark magic on a man's soul.

Salyards sets himself apart from the very beginning. His protagonist, the scribe, Arkamandos, while similar to the protagonist of Cook's Black Company novels, is far too naive and wet behind the ears to rate anything more than the most cursory of comparisons. Arki is a fish out of water, thrust into the company of Syldoon mercenaries whose bloody reputation seems all too well deserved. This choice only serves to spotlight the differences between the Syldoon and the young chronicler, who is far more like most genre readers than the typical viewpoint character.  This similarity, while possibly off-putting for those who like their protagonists larger than life, adds a level of deeper connection to the protagonist that is often lacking in genre novels. Adding depth is the fact that Arki is, for all intents and purposes, an orphan, and it seems that with his joining the Syldoon he may have found a family at last, if only he can survive the experience.

Arki, while naive, is profoundly observant. Through this lens Salyards delivers a complex and compelling account of the small brutalities and abrasive personalities of the Syldoon, while simultaneously capturing the deep bonds of friendship and loyalty between these hard men and women. While the leader of the Syldoon, Braylar Killcoin, gets the most screen time, all of the supporting cast are fleshed out so well that they easily slip the bonds of the page, elbowing and jostling their way into the reader's thoughts long after the novel is finished.

Arki's budding friendship with the outcast Grass Dog Lloi is particularly well handled. As the only woman in the company, the Grass Dog is almost as much of an outsider as Arki himself. She is still a hard woman, but serves as a somewhat softer counter balance to the harsh and critical Killcoin. Also of note are Killcoin's lieutenants, Hewspear and Muldoos. Although they are placed further in the background than Killcoin and Lloi, their bickering and bravado serves to hide the deep sense of loyalty and respect they have for one another and the rest of the company. It is through the smaller moments and often using his supporting cast that Salyards reveals the layered truth of this band of mercenaries. They may be violent, vulgar and brash, but they are good men that can be counted on to stand by their own.

For most readers, Braylar Killcoin will be the star of the novel. The Slydoon Captain is a man of many moods, so mercurial that I was left wondering if he suffers from bi-polar disorder in addition to the haunting effects of his cursed flail, Bloodsounder. Killcoin is at turns cruel and kind, understanding and quick to anger at the smallest slight. Salyards' dialogue shines when Killcoin speaks and the reader never knows which aspect of the Captain's fractured personality will appear. We learn about Killcoin in fits and starts and even by the end of the novel he is far from a solved puzzle. There is a sense that we have only seen a glimpse of the depths of the tortured Captain.

Much the same could be said about Salyards' approach to worldbuilding. The novel seems far more a character study than most books in the genre, and as a result, there is precious little info-dumping in Scourge of the Betrayer. It would almost be fair to say that there is little worldbuilding at all. Salyards' doles out information on the setting sparingly, only hinting at bigger mysteries to be revealed later. I'm definitely looking forward to learning more about Bloodsounder and its curse, the inner workings of the Syldoon, the Godsveil, and more. If Salyards picks up the pace in that department, I think Bloodsounder's Arc will find even more fans.

The pace is quick even in quieter moments, and Salyards manages to pack quite a lot of story into a very small space with the novel clocking in at just over 300 pages. That pace is used to great effect in the battle scenes that permeate the story. With the inept Arki as the sole viewpoint, we get a very different perspective on violence and Salyards wisely shows both Arki's fear and revulsion at the very realistic depictions of the carnage and brutality that are common place in the world of the Syldoon. The prose is equally dark and brooding, easily accenting both the themes of the novel and the characters that populate it.

All in all, Scourge of the Betrayer is a tale of startling violence told through one of the most unique protagonists I've seen in recent memory. Salyards draws a world full of dark atmosphere, complex and richly drawn characters, and more mystery than James Patterson's back catalog, Those searching for something to fill the space between the works of Abercrombie and Lawrence
should look no further than this excellent start to a promising series.
Posted by Unknown at 8:21 PM