It took several years to convince me to read Jim Butcher's Harry Dresden series. The biggest stumbling block was my general disdain for urban fantasy, which at that time I had dismissed as books about chicks who sleep with dead things. But the other piece of my reluctance was that I had been told that it may take a book or two for me to be completely sold on the series. The idea that I would have to slog through multiple volumes to get to the good stuff simply didn't appeal to me very much. But eventually, I relented and picked up an omnibus edition of the first three Dresden  novels from the Science Fiction Book Club. What can I say, three books for the price of one was the excuse I needed and all but guaranteed I'd make it to the "good stuff" my friends were so wild about. Turns out my friends were right, and now I chase after Dresden novels like a junkie needing a fix. Butcher's most recent installment, Cold Days, is a speedball of a novel that is easily one of the most compelling novels in the series. 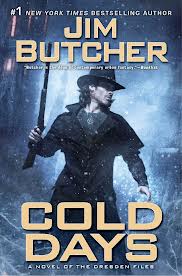 After being murdered by a mystery assailant, navigating his way through the realm between life and death, and being brought back to the mortal world, Harry realizes that maybe death wasn’t all that bad. Because he is no longer Harry Dresden, Chicago’s only professional wizard.

Of course, it won’t be an ordinary, everyday assassination. Mab wants her newest minion to pull off the impossible: kill an immortal. No problem there, right? And to make matters worse, there exists a growing threat to an unfathomable source of magic that could land Harry in the sort of trouble that will make death look like a holiday.

Beset by enemies new and old, Harry must gather his friends and allies, prevent the annihilation of countless innocents, and find a way out of his eternal subservience before his newfound powers claim the only thing he has left to call his own…His soul.


As you can see, Butcher takes great delight in tormenting his protagonist with impossible odds, antagonists that easily out class him, and temptations that would bring any normal person to their knees. For long time fans of the series, this is nothing new, but Butcher continues to increase the stakes chapter after chapter to levels so far beyond what has come before that we are left wondering not if Harry will succeed (because he always does) but what terrible cost will he or his loved ones have to pay?

When writing a character or series for an extended number of volumes there is always the risk that the formula or narrative voice will become predictable and or stale. That familiarity will breed contempt, if you will. But too much change can swing the needle in the other direction, and fans can depart because the series is not close enough to what they know and love. Butcher doesn't  walk through this mine field so much as he dances through it with a maniacal glee. Harry is faced with change after change, both in his personal circumstances, his relationships, his responsibilities, and even in his personality. And yet through it all, he is still the same wise cracking wizard trying to do the right thing under increasingly impossible situations, and like always he manages to screw it up more often than not.

Butcher wisely shows us more of Harry's supporting cast than he did in Ghost Story, while also introducing some new characters on both sides of the conflict. Butcher's take on a certain red-suited fat man was particularly satisfied. Plot threads from the previous volumes get some progress and some long standing questions are answered and new mysteries are revealed laying ground work for many more adventures with Chicago's premier wizard and his motley crew of allies and adversaries.

The plotting maintains Butcher's breakneck formula to good effect with the last quarter of the book taken up with a battle royale that rivals anything that has come before both in its stakes and effects to the status quo. If you thought killing Harry only to bring him back from the dead was something Butcher couldn't top, I'd advise you to think again. The novel's conclusion has the potential to change things more than any other revelation in the series so far. I only had one complaint with Cold Days. It ended, leaving me with that familiar itch I'll have to wait another year or two to scratch.
Posted by Unknown at 7:00 PM