Review of the Week: Daughter of the Sword by Steve Bein

Daughter of the Sword has been on my radar for a while now. As a martial artist who loves Japanese culture and swordsmanship and a long time reader of crime fiction, the premise of Bein's debut novel was near irresistible. A Japanese themed crime story with magic swords, you say? From a expert on Japanese history and a twenty year martial artist to boot? Well lets just say that there was little chance that I wouldn't give Daughter of the Sword a try. And I'm glad that I did. Bein turns in a story that is captivating, authentic, and full of history, character, and mythology that is handled with the delicate artistry of a the warrior poets of old. 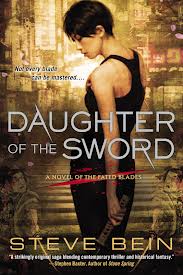 And here's the story summary from the publisher:

Mariko Oshiro is not your average Tokyo cop. As the only female detective in the city’s most elite police unit, she has to fight for every ounce of respect, especially from her new boss. While she wants to track down a rumored cocaine shipment, he gives her the least promising case possible. But the case—the attempted theft of an old samurai sword—proves more dangerous than anyone on the force could have imagined.

The owner of the sword, Professor Yasuo Yamada, says it was crafted by the legendary Master Inazuma, a sword smith whose blades are rumored to have magical qualities. The man trying to steal it already owns another Inazuma—one whose deadly power eventually comes to control all who wield it. Or so says Yamada, and though he has studied swords and swordsmanship all his life, Mariko isn’t convinced.

But Mariko’s skepticism hardly matters. Her investigation has put her on a collision course with a curse centuries old and as bloodthirsty as ever. She is only the latest in a long line of warriors and soldiers to confront this power, and even the sword she learns to wield could turn against her.


Bein's protagonist, despite the somewhat stereotypical female bad-ass pose she's placed in on the cover has very little in common with the much maligned urban fantasy heroine. Sure Mariko is tough, as any women working in the misogynistic environs of the police force in Japan would have to be. But she never uses her gender as a weapon, wanting more than anything to be seen as an equal to her male counterparts. Her strength comes not from supernatural gifts or even from her eventual training from a renowned sword master, but from her dogged determination to see things through despite the obstacles placed before her. The genre needs more female characters like her.

The supporting cast is equally well rounded. Professor Yamada, while certainly falling into the trope of wise mentor and teacher, never chews the scenery, even when he's easily dispatching a quartet of murder-minded yakuza. He's more Miyagi than Kenobi, and injects every scene he graces with a quiet dignity and dry humor.  He's every sensei I've ever had, and all the ones I wished for all in one. Even the villian of the piece isn't as two dimensional as he appears at first glance, though he is serves more like a force of nature than an actual character.

And all of this doesn't even touch the secondary story lines that run through out the novel. Bein tells the stories of the Inazuma blades at varying times in history ranging from the feudal period to World War II. Even the characters who are "throw away" are well drawn and engaging and I was often sad to see their stories come to end. Bein does a fantastic job of making the blades themselves characters in the story. Not in the awakened blade tradition of table top role-playing games, but through the subtle  and some times terrifying influence they exert on their bearers. The layering of the present and the past is deftly handled and I never felt an ounce of frustration or anxiety when the story shifted away from the present.

The plot while largely unremarkable was nonetheless effortless and entertaining, with a few twists that I didn't see coming. But the lack of jaw-dropping revelations and unexpected twists didn't hamper my enjoyment in the least. Bein's prose is understated and almost invisible allowing me to escape into the story almost as if I were watching it unfold. But at certain key moments I found myself transfixed by a bit of imagery or simple elegance in the prose that showcased just how much the culture of the novel was woven into its physical substance. Bein's knowledge of the setting and themes in play really shines, giving the novel an authenticity that the reader can feel as early as the first few pages. His proper use of terminology and excellent handling of the customs and language of Japan elevate the writing far beyond the Wikipedia and anime driven research methods I've seen in some novels set in the Land of the Rising Sun. Bein's Tokyo is rich with detail as are the different historical periods visited through the course of the novel.

I wholeheartedly recommend Daughter of the Sword to all fans of urban fantasy, crime procedurals, and historical fiction. Bein is a talent to watch and I am anxious for the next installment in the Fated Blades series.