t's safe to say that my tastes as a reader are changing because of this blog.  In my pre-blogging days, my reading followed the same well worn and predictable path. The mix was fairly predictable; epic fantasy, urban fantasy, with an occasional highly recommended curiosity thrown in for flavor's sake. Well those days are over, with books like The Troupe, The Blue Blazes, The Lives of Tao, and now  taking over my reading space.

Zoo City is one of those rare novels that instantly adds the author to my 'must read' list. Lauren Beukes packs her sophomore novel with wildly vivid metaphors and prose that pops with a unique mix of desolate beauty. Add the unique pastiche of genre trappings ranging from literary fiction, crime thriller, and magical realism and the resulting novel is a beautiful monster that defies easy classification. 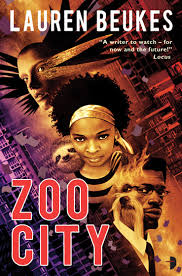 Since the back copy does a poor job of impressing the particulars of Beukes' setting I'll extrapolate a bit. Zinzi is a 'zoo', a criminal mystically saddled with a animal companion as a penance for her crime. She and her sloth are bound until death, and more important her status as a Zoo has removed her from her life of relative privilege and dropped her square into the squalor of . The only upside to being animalled is her 'mushavi', a magical talent for finding lost things. Zinzi uses her ability to earn a meager living, while paying off her debt to her former criminal associates using her journalistic talents writing letters for their 419 scams. When a client dies mysteriously, Zinzi is a suspect and without a paycheck. This causes her to take a missing person's case, tracking down one half of a teen-pop duo for their eccentric producer. This task quickly embroils Zinzi in a complex web of corruption, magic, and intrigue.

Beukes' first hand knowledge of her setting, Johannesburg South and her experience as a journalist are in full display from the opening chapters. While Zinizi December is the defined protagonist of the story, with the entirety of the novel being told from her perspective, I would say that itself is Beukes' most important and fully realized character. Since Zinzi is animalled, and automatically considered a second class citizen and pushed to the fringes of society, Beukes is focused on the seedy underbelly of her alternate Jo-burg. And she pulls absolutely no punches, never flinching from the despair, poverty, and pall of hopelessness that hangs over the marginalized fringe that reside within its borders.

Beukes shows a deft hand with characters as well. Zinzi December is everything I am not. African, female, criminal, addict, etc, and yet I came to not only understand but identify with her quest to re-imagine herself and to take her life in a completely new direction. With all the talk about writing strong female characters that is bandied about the internet, one could easily point to Zinzi as an example of what the genre needs. Zinzi December is complicated, conflicted, capable, cunning, foolish, flawed, and fierce. She is not a collection of 'kick ass female' archetypes, and Beukes never tries to turn her into action hero with breasts. And is better for it.

Beukes brings her journalistic chops to the forefront in the form of chapters that mine background information from newspaper and magazine articles, emails, and even YouTube videos and their comments. These asides while disconnecting the reader from the narrative voice of Zinzi's point of view, really do add a level of realism and richness to the novel that far outweighs the possible inconvenience to the reader.

is full of narrative distractions. Beukes fills the pages with smaller character moments between Zinzi and various other denizens of the urban sprawl she calls home, as well as a wide variety of other characters from both her former life, and those she encounters during her investigation. Frequently I found myself wondering if all of Zinzi's meandering was ever going to arrive somewhere, while simultaneously finding myself entralled with her astonishing use of metaphor and concisely poetic prose.

They say, and rightly so, that the destination is far less important than the journey one takes to arrive. could have been a fine example of this principle if Beukes had failed to deliver on the unspoken promise of her setting and characters. The final fourth of the novel is a breakneck demolition derby of adrenaline and anxiety as all the players collide and all is revealed much to the reader and Zinzi's surprise.

While Beukes layers more than a little social commentary into the narrative but it never takes away from the novel or preaches. These elements are part and parcel to the culture of Beukes imagined Jo-burg and are as ever present as the drug dealers and animalled prostitutes. They are setting more than story, with Zinzi’s personal journey to steer her life in a new direction against a society that is determined to keep her in a neatly zoo-labeled box. and Beukes seem to be on a similar trajectory, tearing off genre labels and setting out into unexplored territory. That journey is one that lovers of nuanced and beautifully crafted fiction would be wise to undertake, especially in Beukes’ capable hands.
Posted by Unknown at 1:41 PM