Grimoire of the Lamb by Kevin Hearne

Kevin Hearne's Iron Druid Chronicles has been one of my favorite urban fantasy finds of the last few years. It like Michael J. Sullivan's Riyria series, has a lighter, more nostalgic tone that I find refreshing in between darker, more serious books. True to form, Hearne has released a novella to tide fans over until his next novel hits shelves. Having really enjoyed the last of Hearne's shorter work, the excellent Two Ravens and One Crow, I was excited to delve into this look into the early days of Atticus O'Sullivan. 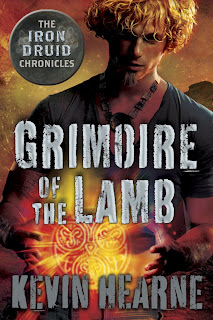 The publisher's synopsis is as follows:

When he’s not vanquishing villainous gods or dodging demons, two-thousand-year-old Druid Atticus O’Sullivan can be found behind the counter of Third Eye Books and Herbs in modern-day Tempe, Arizona, literally minding his own business. But when an evil sorcerer—and amateur shoplifter—snatches an ancient Egyptian tome of black magic, The Grimoire of the Lamb, Atticus is not sheepish about pursuing him to the ends of the earth . . . or at least to the Land of the Pharaohs.

Unfortunately, Atticus already has enemies in Egypt—including cat goddess Bast, who wants her own book of mischief back from the Druid. In the streets of Cairo, she sends a feline phalanx after Atticus and his Irish wolfhound, Oberon. With fur still flying, Atticus must locate the sorcerer’s secret lair—where he will face killer crocodiles, spooky sarcophagi, and an ancient evil Egyptian who’s determined to order the sacrificial lamb special tonight.

Set before the events of Hounded, there is a certain amount of nostalgia to be found in seeing Atticus once again in his familiar stomping grounds. Readers are treated to characters and locals that have for the most part been abandoned as the series has taken Atticus far from the setting where the series began. While this is certainly a treat, the lack of fan favorite characters such as the Morrigan and Atticus' apprentice Granuaile is a bit of a let down. Oberon, Atticus' Irish wolfhound is present to provide his particular brand of canine hilarity, which is always a highlight of Hearne's work. The scene in which Atticus and Oberon are being herded by a literal phalanx of cats is a definite standout on the humor front.

All of the things you know and love about Hearne's work are present here. Pop culture references and sarcastic humor are everywhere, and the action sequences are as pulse pounding as ever. But somehow Grimoire of the Lamb manages to miss the mark some how. I believe the removal from the current time line and the absence of some of the standout characters of the series combined left me wanting something different from what I got.

That said, I don't fault Hearne for my disappointment. He delivers a rewarding story, adds mythos to the setting, made me laugh, and I enjoyed spending time with Atticus and Oberon again. At the end of the day, this novella is an appetizer when what I really wanted was a full course meal. Lucky for me, Hunted is slated for a June release. I'll be more than ready to pull up a chair at Hearne's table again.