I read a pretty large amount of urban fantasy, but tend to stay away from the paranormal romance sub genre. But I'd heard good things about Ilona Andrews so decided to give Gunmetal Magic a go, having been convinced that Andrews' novels were more urban fantasy than paranormal romance. I won't say I was mislead, because Andrews certainly has some good things going on in the novel, but the protagonist's preoccupation with her romantic entanglements and relationship issues diluted my enjoyment of what could have been, in my estimation a much better book. 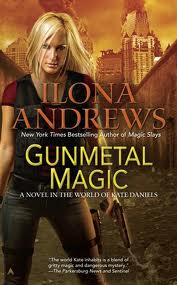 The publishers blurb is as follows:

After being kicked out of the Order of the Knights of Merciful Aid, Andrea's whole existence is in shambles. She tries to put herself back together by working for Cutting Edge, a small investigative firm owned by her best friend. When several shapeshifters working for Raphael Medrano--the male alpha of the Clan Bouda, and Andrea's former lover--die unexpectedly at a dig site, Andrea is assigned to investigate. Now she must work with Raphael as her search for the killer leads into the secret underbelly of supernatural Atlanta. And dealing with her feelings for him might have to take a back seat to saving the world...

The novel opens well with Andrews using a flashback sequence to give some set up on both the protagonist, the were-hyena Andrea Nash and the setting simultaneously. All of this information is delivered in fairly large brush strokes, and I was initially disappointed by this approach, but once I determined that Gunmetal Magic is part of an ongoing series, I was able to get past the scarcity of details. Andrews actually does an excellent job of keeping the story self-contained, while making nods to the other books in the series. Gunmetal Magic may be a richer novel with knowledge of the previous installments, but I never felt like I was lost because of lack of relevant information.

The setting certainly compelling was missing a great bit of detail that I suppose was covered in the earlier books in the Kate Daniels series. I found myself wanting more information about certain elements of the setting and characters, but since Gunmetal Magic is Andrea's story Andrews wisely keeps the narrative tightly focused on her first person narrator. Which is where my disconnect begins.

Andrea Nash is in many ways the stereotypical 'kick-ass urban fantasy heroine', though luckily the novel's cover doesn't pander to the artistic stereotyping that plagues most other novels of its type. Andrea is a dogged investigator, capable warrior, and powerful shapeshifter. All of these traits are on full display within the opening scenes. But once the action dies down, this capable heroine immediately dissolves into a whining love obsessed teenager. All she seems to focus on is her failed relationship with Raphael, and the pair of them spend most of the book sniping at each other rather than grow up and handle their problems like the adults they appear to be in all other aspects of their lives. The pervasiveness of this material made the investigation plotline and the battles seem like a subplot more often than not, and it really limited my ability to enjoy the otherwise well constructed story.

Thankfully, Andrews is more than awareness of the childishness of her characters behavior. During a conversation with the star of the rest of the series, Kate, Andrea's relationship troubles are likened to a Spanish soap opera and I couldn't help but agree with the sentiment. That self awareness was was a treat albiet a temporary one. Becasuse immediately after that conversation, both Andrea and Kate play the mother of all childish pranks on Raphael. Thankfully there is growth at the end of the story for both Andrea and Raphael.

All in all, I can see why Andrews is one of the most popular of urban fantasy writers, she's created a memorable world, compelling characters, and plenty of action. I am curious enough about the world she's created that I may give the beginning of the Kate Daniels series a try. But I can only hope that the maturity level of the relationships in those books is higher than what I saw in Gunmetal Magic.