Engraved on the Eye by Saladin Ahmed

One of the most unique new voices in the genre belongs to Saladin Ahmed. His debut novel Throne of the Crescent Moon was the very first debut novel I reviewed. So when I heard that Ridan Publishing was releasing a collection of Ahmed's short fiction, I was understandably excited. With a low price and an immediate release date, I snatched it up and blocked out some quality time with the e-reader. 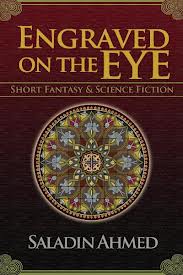 Fans of Throne of the Crescent Moon will be pleased to know that Ahmed chooses to open this collection with another story of Dr. Adoulla Mahkslood and Raseed bas Raseed. Where Virtue Lives tells the tale of the venerable ghul hunter's first meeting and subsequent adventure with the young dervish. Ahmed does an excellent job of showcasing the vastly different world views of these two signature characters while demonstrating the wisdom of their partnership. Fans of the series will be right at home, but Ahmed also provides just enough background detail to reveal the rich setting that is Dhamsawaat. As always, Ahmed has a moral in mind. Raseed's revelation that the virtue he prizes so highly might come from unexpected sources is the heart of this glimpse into the early days of our heroes.

The collection continues with two more stories set in the world of The Throne of the Crescent Moon. The first, Hooves and the Hovel of Abdel Jameela tells the story of a court physiker who is temporarily exiled from the Caliph's court to the backwaters of the kingdom because of his own impertinence. While in Beit Zujaaj, he hears of a hermit of questionable parentage who lives on the outskirts of the village and is the subject of all manner of small town suspicion and gossip. When he is called upon to help the hermit's ailing wife he is faced with something out of nightmare that promises him his heart's desire and a return to court besides. This entry reads like a fairy tale, and is rich with Ahmed's signature style. He definitely adds a new layer to the flavor of his most famous setting.

The final tale in a familiar setting is the excellent Judgement of Swords and Souls. Set in the Lodge of God, home of the blue garbed Dervishes, this story tells the tale of Layla bas Layla. She has come into conflict with many of the Shaykhs due to her choice to wear a red scarf handed down by her deceased mother against the traditions of her adopted family. Layla is caught in a power struggle between the current head of the order and those who would weaken his position, but chooses to stick by her oath to wear the scarf despite the objections of those who would persecute her for breaking an unwritten and obscure dictum. The clash that follows changes both the direction of the Lodge and the path of Layla's life and I, for one, hope that this character makes an appearance in the sequel to Throne of the Crescent Moon. Ahmed's choice to reveal more detail about the organization that shaped Raseed bas Raseed was inspired, giving us an insight into a beloved character while adding yet another layer of depth to the setting and hopefully another character as well.

The rest of the collection are unconnected to the world that has brought Ahmed such critical acclaim, but were all published previously. Some were even contenders for both the Nebula and Campbell awards. These accolades are well earned. These stories, perhaps more than Throne of the Crescent Moon, reveal more about the author and his thoughts on his place as an Arab-American dealing with a society that preaches acceptance on one hand and yet is so full of judgement and prejudice on the other. In Doctor Diablo Goes Through The Motions, Ahmed tells the story of a super-powered criminal who's observations on his fellows and adversaries is full of equal parts razor-sharp sarcasm and astute commentary on racial stereotypes and the criminal justice system. While I doubt this character could support a longer story, I found myself loving his wit and weariness and was saddened by the necessary brevity of his tale.

Given recent events on the global stage, I found General Akmed's Revenge? to be the most thought provoking tale in the collection. This story explores the dichotomy of an immigrant's love/hate relationship with his adopted home, shining a spotlight on the prejudices and stereotyping that is all too present in American society. As a Southerner, I'm all too familiar with the themes of this story. While I certainly don't share the reprehensible traits presented, the stark focus of this story made me more than a little uncomfortable. And that is the true strength of this story, which deftly balances commentary with unexpected humor. More than anything else contained in this volume, General Akmed's Revenge? begs to be read.

My favorite story of the collection was the surprising mash-up of Arab flavor and the Old West, Mister Hadj's Sunset Ride. Reminiscent of the Charles Bronson flick, Red Sun, Ahmed tells the story of a bounty hunter from 'Araby' and his young partner who is on the trail of a trio of deadly outlaws who hide their villainy behind a thin facade of Jesus-loving clap-trap. It wouldn't surprise me at all if this story didn't inspire the adventures of Raseed and Abdoulla. And like its more famous cousin, this story is full of magic, menace, and monsters. I was left wanting much more of this setting.

The final two stories in the collection, The Faithful Soldier, Prompted and Iron Eyes and the Watered Down World, center around devotion and importance of family. The Faithful Soldier, Prompted is the story of man who believes he is being led to a cure for his ailing lover by a long obsolete piece of in-bedded technology from his youth in the military. Besides being an interesting take on the 'ghost in the machine' concept, this story is at its heart a tale of the lengths one man will go to to protect the love of his life. Ahmed explores prejudice again here but takes a different tack, zeroing in on the bigotry that exists within racial bounds. This didn't impact me as much as the previous story, but is nonetheless right on the money.

Ahmed ends with a ghost story wrapped in an intriguing fantasy setting in Iron Eyes and the Watered Down World. This story follows a trio of adventurers as they try to recover a stolen memento from the world weary widower who is the wounded heart of their band. While the intensity of the protagonist's need to recover his cherished possession is all too understandable, the motivation for the theft seems arbitrary until the very end, where Ahmed wraps it all up nicely with a life changing revelation. After the hard-edged, thought provoking subject matter of the proceeding stories, it was a welcome relief.

All in all, I have rarely read a collection of shorts that was as well polished and satisfying as Engraved on the Eye. Both fans of Throne of the Crescent Moon and those unfamiliar with Saladin Ahmed would be doing themselves a disservice in passing up on this engaging and thought-provoking collection from one of the rising stars of the genre.
Posted by Unknown at 4:52 PM