One of the more recent authors to be added to must read list is Michael J. Sullivan. His Riyria Revelations series published last year by Orbit was such a page turner that I finished all three volumes (which actually were omnibuses containing two novels each) in a two week spree. Sullivan's style of accessible sword and sorcery recalls all the best bits of genre legends like the late David Eddings while borrowing heavilly from the structure of genre television standouts like Battlestar Gallactica and Babylon 5. The Crown Tower begins a prequel cycle featuring the protagonists of The Riyria Revelations. I've missed Hadrian and Royce and can't wait to read them again. 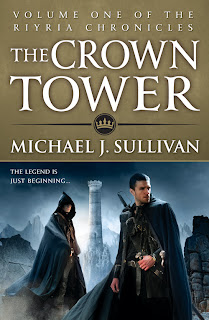 And here's the blurb from the publisher:


Two men who hate each other. One impossible mission. A legend in the making.

Hadrian, a warrior with nothing to fight for is paired with a thieving assassin, Royce, with nothing to lose. Together they must steal a treasure that no one can reach. The Crown Tower is the impregnable remains of the grandest fortress ever built and home to the realm’s most prized possessions. But it isn’t gold or jewels that the old wizard is after, and if he can just keep them from killing each other, they just might do it.