Hugh Howey's Wool was one of the first books outside of epic fantasy that I reviewed, and I was blown away by his claustrophobic tale of the remnants of humanity living below the earth in silos for so long that their inhabitants had forgotten the world above. Howey's blend of science fiction and literary realism was a standout of 2012 for me, so as I approached the first anniversary of this blog, I decided to delve into the second offering in the world of the silos.

While Howey still turns in an atmospherical tale within the pages of Shift, I found it underwhelming in comparison to his earlier work. There was a, pardon the pun, a shift from the sci fi elements into a stronger lit fiction feel, and I found the result well written, but ultimately a trifle unsatisfying. 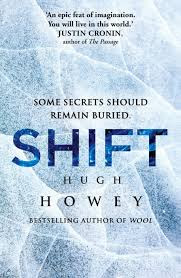 In 2007, the Center for Automation in Nanobiotech (CAN) outlined the hardware and software platform that would one day allow robots smaller than human cells to make medical diagnoses, conduct repairs, and even self-propagate.

In the same year, the CBS network re-aired a program about the effects of propranolol on sufferers of extreme trauma. A simple pill, it had been discovered, could wipe out the memory of any traumatic event.

At almost the same moment in humanity’s broad history, mankind had discovered the means for bringing about its utter downfall. And the ability to forget it ever happened.


Not the most exciting synopsis, is it? I would have passed on this based on the cover art and back copy, if I hadn't been so impressed by Wool. But poor marketing aside, Shift is, on it's face, a welcome addition to Howey's flagship franchise. With it's structure following the same format as it's predecessor, made up of sepearate novellas all connected either through events of reoccuring characters, Shift will feel comfortably familiar to those who devoured Wool.

The first novella introduces us to Donald, a freshman Congressman, who is swiftly entangled in the construction of the silos and the conspiracy behind their true purpose. While Donald is sympathetic and well drawn character, I couldn't help but be appalled at the over all lack of agency he seems to have in this opening novella. I know this is intentional, as Donald is embroiled in circumstances so far beyond his understanding and control that he is simply swept along on its currents. Donald seems to react far more than he ever acts and because of this I found his initial character arc, which is the core of the first novella less than satisfying. I realize that the entire purpose of Shift is to fill in the origin of the silos, but with the foreknowledge that comes with having already read Wool, I couldn't bring myself to care enough about that origin with a protagonist that comes off as milquetoast as Donald.

The second novella, which splits time between Donald and a young porter named Mission Jones, is far better and I found myself wishing that his story was the central thread. Mission's tale centers around the collapse of one of the silo's and shows not only Mission's growing understanding of the silo politics and his questioning of the 'survival of the fittest' philosophy that is at the crux of the silo project. Donald appears here as well and we learn first hand what measures that the architects of the silos will go to keep their experiment going. It's a chilling and poignant tale and in my opinion was the strongest of the novellas included in the omnibus.

The final novella shows what happens when Donald, who by all appearances is the moral compass of the overarching plot of the collection, is placed in charge of the silos. Donald's decent into petty revenge is, while understandable and realistic, largely unsatisfying. The secondary plot, which takes us back in time to follow young Jimmy Parker, who appears in Wool was more palatable at least to me. Seeing the youngster adapt to the crushing lonliness and sporadic violence of the collapse of his silo was both heart wrenching and beautifully executed. This is what Howey does best, creating characters that his readers can empathize with and that manage to survive with nothing more than their strength of character. Jimmy's encroaching madness is well handled and makes the boy's survival all the more heart wrenching. Howey also teases the intersection of Donald and Juliette's story lines for the final volume of the Silo saga, the upcoming Dust.

While I found Shift to lack the suspense and surprise of Wool, there is no denying the emotional heft and deft examination of survival and community in Howey's work. I suspect that the challenges of writing a prequel to such an engaging property are monumental and probably contributed to what felt quite a lot like 'middle book syndromwe' to me. Nevertheless I'll tune in for Dust because I suspect the showdown between Juliette and Donald to be far more satisfying than this look back at the origins of the Silos.