I'm confident that having a popular and well received series is the dream for most authors. Unfortunately, many authors of such series develop what I like to call "cash cow" disease, and their series drag on coming more and more bloated as the author milks every last drop of financial success from the property, diluting what was once a intriguing property by forgetting that sometimes less is more. When I heard that Michael J. Sullivan was releasing prequel novels to his excellent and completed Riyria Revelations, I worried that any return to the lives of Hadrian and Royce would pale in comparison to the completed series. Sullivan closed the door on these characters well and left almost no unanswered questions on the table, leaving my concerned that these prequel novels would be irrelevant to the series as a whole. I couldn't have been more wrong. The Crown Tower is a worthy addition to the Riyria property, full of the excellent characterization and light-hearted sense of adventure that made Sullivan such a success. More importantly it deepens the readers understanding of the protagonists and adds a richness to the preceeding books thus rewarding readers that have already devoured the preceding six volumes. 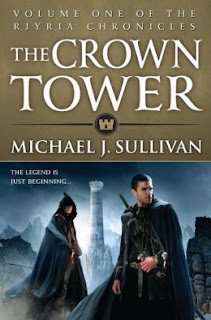 The books back copy follows:


TWO MEN WHO HATE EACH OTHER.

A LEGEND IN THE MAKING.

A warrior with nothing to fight for is paired with a thieving assassin with nothing to lose. Together they must steal a treasure that no one can reach. The Crown Tower is the impregnable remains of the grandest fortress ever built and home to the realm’s most valuable possessions. But it isn’t gold or jewels the old wizard is after, and this prize can only be obtained by the combined talents of two remarkable men. Now if Arcadias can just keep Hadrian and Royce from killing each other, they just might succeed.

Sullivan begins The Crown Tower before his protagonists have met and allows the reader to spend quite a bit of time with Hadrian before he begins his association with Royce. This was a inspired choice, giving readers time to soak up the difference between this younger, and surprisingly even more idealistic version of the character they have grown to love. This becomes very important as the easy familiarity and friendship between the warrior and assassin are nowhere to be found in this volume. Sullivan doesn't take the easy route to establish the character's partnership. This is far less about their first adventure than it is about the process of forging the bond between them. The sparks fly and there is plenty of bickering replacing the banter of the Riyria Revelations. In a lot of ways the snark is even more entertaining when there  is real vehemence behind it, but the sense of humor that underlies it all hints at the partnership that readers know is coming. Sullivan does an excellent job of showing why these two loners need each other and how the pairing of their skills and world views will strengthen and eventually redeem them both.

Sullivan also structures the story so that it can be read either as the beginning of the series or in the order of publication. There are benefits to both approaches, as Sullivan seeds the narrative with nods to the events of his previous novels. These tips of the hat, give the long time reader a sense of being in on the process, and they rarely feel forced. Newer readers who approach the series through the prequel novels first ,will benefit of seeing the pay off, with Sullivan's careful attention to not spoil the tension and big reveals of the later books with his nods to his legions of fans.

Sullivan also introduces Gwen DeLancey as a point of view characters for the first time in The Crown Tower. With the majority of the female protagonists not appearing until much later in the series' timelines, it makes perfect sense that Gwen would be used in such a way. This choice also adds depth to a well loved supporting character and makes Gwen's later relationship to one of our heroes make much better sense. These sections were some of my favorites, not just because of the newness of them but due to expert way that Sullivan portrays Gwen. Though she starts the novel as a prostitute in a hole of a brothel, she never lacks agency and Sullivan handles the more adult themes of her circumstances with a touch that is light, but yet not so squeaky clean as to become unrealistic. Gwen is just as much the hero of her story as Royce and Hadrian and the fact that she stays far removed from their exploits only strengthens her as a compelling protagonist. I certainly am looking forward to more of her story in the rapidly approaching The Rose and the Thorn.

The Crown Tower is Sullivan doing what he does best. As I've said in other reviews of Sullivan's work, if you are looking for a return to the fantasy of your youth that manages to still feel relevant without burying itself in the grit and blood of Abercrombie, Martin, or Morgan, then you should look no further. Snappy banter, desperate stakes, pulse pounding sword play, and good old fashioned heroics are all on full display here. Everything you've come to expect from the adventures of Hadrian and Royce is contained within the pages and with the addition of Gwen's chapters there is a richness that I certainly wouldn't have expected in what so easily could have been a "cash cow" add on to a beloved series. I hope that there are many more novels to fill in the twelve year gap between The Crown Tower and Theft of Swords, especially if they are half as good as this one.
Posted by Unknown at 8:23 PM