Under the Empyrean Sky by Chuck Wendig

I first heard of Chuck Wendig's YA novel, Under the Empyrean Sky in the interview I conducted with Chuck after reviewing The Blue Blazes. This is what Chuck had to say about it:

Under the Empyrean Sky, which is my young adult novel in a sunny dustbowl cornpunk future where a scrappy scavenger named Cael finds a secret forbidden garden in a world where their floating Empyrean overlords only allow them to grow a bloodthirsty variant of corn. It's got young love and adventure and piss-blizzards and motorvators and an agricultural pro-farmer pro-food message nestled in all the trappings. John Hornor Jacobs called it Of Mice and Men meets Star Wars, which I quite like.

So I have to be honest, I scoffed at the description, thinking there was no way that Wendig could pull of a novel targeted at a less than mature audience, and wasn't so sure about 'bloodthirsty corn' either. But when I found the title on Netgalley, I just had to give it a run. And, boy was I glad I did. Under the Empyrean Sky is everything that makes YA a powerhouse genre, a coming of age story that resonates with its audience while posing bigger questions for the cross over crowd. There is pathos, mystery, action, and a healthy dose of the bare knuckle prose that makes Wendig such a draw for me. This is no Hunger Games clone, Under the Empyrean Sky brings to mind both the classics like The Grapes of Wrath and mines the Hero monomyth with a rakish glee producing a hybrid much like the aforementioned corn; bloodthirsty and relentless. 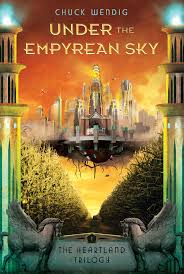 We've seen Chuck's pitch for the novel, but lets take a look at the back copy before we move on.

Corn is king in the Heartland, and Cael McAvoy has had enough of it. It's the only crop the Empyrean government allows the people of the Heartland to grow and the genetically modified strain is so aggressive that it takes everything the Heartlanders have just to control it. As captain of the Big Sky Scavengers, Cael and his crew sail their rickety ship over the corn day after day, scavenging for valuables, trying to earn much-needed ace notes for their families. But Cael's tired of surviving life on the ground while the Empyrean elite drift by above in their extravagant sky flotillas. He's sick of the mayor's son besting Cael's crew in the scavenging game. And he's worried about losing Gwennie ? his first mate and the love of his life forever when their government-chosen spouses are revealed. But most of all, Cael is angry, angry that their lot in life will never get better and that his father doesn't seem upset about any of it. Cael's ready to make his own luck . . . even if it means bringing down the wrath of the Empyrean elite and changing life in the Heartland forever.

Wendig is obviously aware of the market trends toward dystopian YA novels, as much of the skeletal structure of the novel follows the formula. The stereotypical  oppressive government, teen aged protagonists, the beginnings of a love triangle, and the call to arms to fight the rule of the oppressors are all present here. But Wendig wisely turns it on its head, tackling real world issues that may seem too adult for the projected audience. Questions about the control and manipulation of the food that we put into our bodies and the long term effects of monkeying about with Mother Nature are front and center tied closely to the novel's worldbuilding. There are other social issues at play as well, but are much more tangential in this first novel, though I suspect that may change in subsequent volumes. But all of this social activism is handled deftly, with precious little preaching going on, either from the characters or exposition. Social issues may be a thread in the tapestry but Cael's journey for independence and freedom  is the focus and that is where the story shines.

Cael McAvoy is the epitome of a sixteen year old boy, surly with a complete disregard for authority, capable of both incredible kindness and callous indifference to the feelings of others. Self absorbed is the term that comes immediately to mind, but having been a sixteen year old boy I felt an immediate sense of authenticity to the portrayal. Wendig wisely uses the events of the story to soften the edges of his protagonist, giving both Cael and the reader the sense that Cael's world and the people in it don't fit as neatly into the preconceived boxes the sixteen year old might think. By the end of the novel, there is little doubt that Cael is poised on the brink of his true journey into manhood.

The other characters are equally well drawn and Wendig eventually shifts the point of view in such a way as to illuminate these secondary characters even more fully. Both genders get equal time to shine, with Wendig's portrayal of Cael's love interest showing particular maturity and depth without losing the naivete of youth.  I have a feeling that Gwennie Shawcatch will play a major role in later books and can't wait to see what adventures Wendig has in store for her. Cael sister, Merelda is also someone that I'm looking forward to sharing more time with. She gets just enough time in the novel to remain a pleasant cipher readers will look forward to unravelling.

But the real selling point of Under the Empyrean Sky for me was the fantastic job Wendig does of walking the line between the demands of the YA market and the reality of being sixteen. Too many YA books I've read stray so far toward the squeaky clean, that I wonder if the publishers have any idea what it is like to be a teenager. Wendig obviously hasn't forgotten. There is sex, profanity, and senseless bullying. It may not be as gloriously over the top as what Wendig's audience may have grown to expect after books like The Blue Blazes and Blackbirds, but it is there. Even in a YA novel, Wendig manages to still write in a way that doesn't castrate the voice that he's so well known for. He may have tidied it up a bit, but his touch on the pages is unmistakable. And that was the highlight of the experience for me. Seeing one of my favorite authors do something I didn't think they could pull off. In cases like this, I love being wrong.

Under the Empyrean Sky delivers on all levels with a cast of rich characters, a setting that seems limitless in possibility, a message that rides confidently beneath the current of the story and a real understanding of what it is to stand between being a child and an adult, complete with the requisite indecision and ugliness of youth. There's action, adventure, and even a bit of romance in this tale and I'm looking forward to the next installment in the Heartland Trilogy. And I've learned not to scoff at the plans of the incredibly versitile Chuck Wendig.
Posted by Unknown at 12:50 PM