Long before I made my first foray into fantasy novels aimed at adults, I was fascinated with Arthur Conan Doyle's Sherlock Holmes stories. For many years, my collection of all of the Holmes stories was the largest and most well worn book on my shelf. So when I saw the cover of The Iron Wyrm Affair and was immediately reminded of not only the Guy Ritchie movie featuring Tony Stark, but of some of my fondest reading memories from my adolescence. The back cover copy only further peaked my curiosity, teasing me with a seminal quote from Doyle as a final line. Take a look for yourself. 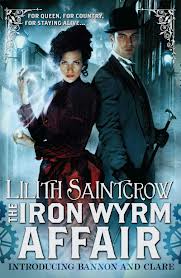 Emma Bannon, forensic sorceress in the service of the Empire, has a mission: to protect Archibald Clare, a failed, unregistered mentath. His skills of deduction are legendary, and her own sorcery is not inconsiderable. It doesn't help much that they barely tolerate each other, or that Bannon's Shield, Mikal, might just be a traitor himself. Or that the conspiracy killing registered mentaths and sorcerers alike will just as likely kill them as seduce them into treachery toward their Queen.

In an alternate London where illogical magic has turned the Industrial Revolution on its head, Bannon and Clare now face hostility, treason, cannon fire, black sorcery, and the problem of reliably finding hansom cabs.

The game is afoot..

Based on that information alone, you might think I'd love this book. It has magic, mystery, and what sounds like a mechanical dragon based on the title, and it is influenced by one of the most beloved authors of my adolescence. I approached The Iron Wyrm Affair from that place, ready to be thrilled and entertained. Sadly, while the concept is certainly compelling, the execution left quite a bit to be desired. The Iron Wyrm Affair is a mess on so many levels that even Saintcrow's best efforts are buried under the weight of her awkward prose and poor execution of some of the most basic concepts of good storytelling. I desperately wanted to like this novel, but try as I might I just couldn't look past its flaws.

My largest gripe with this first installment of the Bannon and Clare series, is the prose. While I certainly understand what Saintcrow is attempting, using the prose to convey an homage to the language of the stories that inspired the novel, to ground it and give it a familiar feel for the reader, the execution is simply too poor to be anything but a distraction from the tale itself. Full of awkward phrasing and repetitive descriptions the prose bears little real resemblance to the writings of Doyle or his contemporaries. Peppering the prose with indulgent word choices with very little in the way of context, really hampered my enjoyment of the novel. A simpler, less stylized prose would have served the novel much better in my opinion. As it stood, the barrier of the language used was almost too much to overcome.

The thing that kept me reading past my issues with the narrative voice, was the concepts Saintcrow used when constructing her alternate London (Londinium in the books). I was intrigued by many of the concepts, sorcerors working hand in hand with mentaths (though I was often reminded of Herbert's Dune, every time I saw the title), ancient dragons sharing the page with clockwork constructs that resemble powered armor or mecha, and a spirit that rules through choosing hosts from British royalty. While none of this is new, the particular mix that Saintcrow devises is full of its own particular flavor and begs for exploration. It's how these elements are explored that left me cold.

While I'm a big fan of writers who exemplify the "show don't tell" philosophy of storytelling, there are times when telling is the only option, and Saintcrow does precious little of it. The particulars of sorcery or Clare's abilities as a mentath are only loosely explained and rarely in the moment when the reader needs answers to better frame the current action. Magic is ever present in Londinium, but Saintcrow seems content to just throw term after term at the reader with zero exposition to frame it. I usually can overlook these things, being patient enough to wait for things to be made clear, but Saintcrow delivers these explanations and clarifications far too late, and I felt that some light exposition should definitely be present far earlier in the narrative.

There are other issues, such as the heroine of the story being seemingly irresistible to every male character she encounters despite the fact her personality is simultaneously cold and thorny for most of her interactions with her male cast mates. Clare's deductive capabilities are poorly used, with Saintcrow never showing the sequence of logic that leads to the mentath's leaps of understanding. Clare's big moments are often just a mess of dialogue that equates to magic hand waving, and is ultimately unsatisfying and make it harder to maintain my suspension of disbelief.

Despite all of the clever ideas and intriguing premises, I doubt I will give the Bannon and Clare series another go. The antiquated and poorly executed prose and unsatisfying level of exposition on critical concepts left me too cold, for even the most engaging of other aspects to keep me reading.
Posted by Unknown at 10:37 AM