With the holidays over, I imagine that many of my fellow bookworms have gift cards and Christmas cash burning a hole in their pocket. With that in mind here are the ten best novels, I've read this year minus a few of the bigger names that the vast majority of genre fans have purchased long ago. I made the decision not to include some novels that were all but sure things simply because, there are lesser known novels that are just as good and could definitely use some publicity, no matter how small. But rest assured, though you may not see a King, Gaiman, Butcher or Brett in residence here, these authors are in no way less worthy simply because they don't have the benefit of decades in the business of a successful franchise to their names. 2013 was a year of discovery for me, and I'd like to share the very best of those with you all. Happy Holidays and I hope you find a novel you've not yet read in this list. 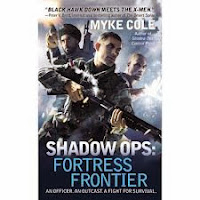 10. Fortress Frontier by Myke Cole: Sophomore novels are tricky, especially when the first novel is well received. Myke Cole did the unthinkable and bested his debut, Control Point in every way. Fortress Frontier adds depth to the cast, concept, world building and even the prose itself all while still drawing heavily on all the traits that made it's predecessor such a hit. There's action a plenty, character growth that leaves reader's cheering, and an authenticity born from the author's life experience. Military fantasy rarely gets better and Cole has proven again that he's a major talent. I'm likely to make the final book in this trilogy, Breach Zone one of the first books I read this year.

9. Generation V by M.L. Brennan: I gotta admit, I wasn't expecting to like this novel half as much as I did. I mean, vampire protagonists are overdone, right? But Brennan's Fortitude Scott is a different animal all together. He doesn't want to be a vampire, and given the ingenious fact that Brennan's vampires are born, rather than turned, he doesn't have to be one, not in the ways readers might expect. Fortitude doesn't exude sex, or handle himself well in a fight. He's a push over, vegetarian,with an art degree and a dead end job. But shit gets real. With the help of a kitsune and his own refusal to give up on a losing battle, Fortitude takes his first steps to becoming a vampire, and more importantly a man. Brennan succeeds on the merit of her new take on a tired trope and the strength of her every man protagonist. I, for one, can't wait for the sequel.

8. The Lives of Tao by Wesley Chu: Another type of novel I rarely read is the comedy, but Wesley Chu's uproariously funny debut was an welcome exception. This sci-fi thriller/comedy reminded me of all the best parts of television's Chuck with an engaging premise reminicent of Invasion of the Body Snatchers. Add in the coming of age tale of the slacker extraordinaire Roen Tan and the pitch perfect and often laugh out loud action sequences and it's easy to see how this debut has catapulted Chu to rising star status. The sequel, The Deaths of Tao may have deviated heavily from the formula of it's predecessor but it showed off a completely different set of writing chops that guarantees I'll be reading Chu's work for the foreseeable future.

7. Vicious by Victoria Schwab: My love affair with superheroes is an old one, but rarely do I find a novel that effectively captures what I love about the genre. Vicious' manages that with its obvious nods to its four color parents ranging from the seminal graphic novel Watchmen and the dynamics between two friends whose acquisition of superhuman abilities destroys every bit of good feeling between them. But better yet, the broken time line structure and the moral ambiguity of the two leads makes for an engrossing character study on the nature of good and evil and the blurring of the line between. I hear Vicious has been optioned  by none other than Ridley Scott, and I certainly hope we eventually get to see Victor and Company on the big screen sooner than later.

6.  The Blue Blazes by Chuck Wendig: If I were going to crown an author of the year it would be Chuck Wendig. I've read three very different novels from him this year and each of those has been a cut above the crowd. The Blue Blazes is simply the best of these. With an unforgettable protagonist in the larger than life and yet tragically broken Mookie Pearl, bombastic action sequences that literally chew up the scenery, and richly bizarre world building Wendig delivers plenty of punch per page. But it's the emotional core of dysfunctional family values that makes it stick in your mind long after the last page is turned.

5.  Love Minus Eighty by Will McIntosh: This compelling novel shouldn't have worked for me. It's science fiction, romantic comedy, and essentially has no real action sequences to its name. But despite not fitting into my wheelhouse at all, Love Minus Eighty kept me enthralled. With pitch perfect characterization, fascinating commentary on the role of technology in our social interactions, and more subtle themes about the trials of forming real connections with the people around us, McIntosh delivers a novel that reminds me of no one more than Phillip K. Dick, where the science is only the vehicle that exposes the beating heart of humanity hiding beneath it. If you don't like sci-fi, romance or books with out explosions, check your baggage and read this book. You'll thank me later.

4. The Thousand Names by Django Wexler: This year was the year of books that took me by surprise. I'm not a fan of military fantasy, but Wexler's debut kept me turning pages late into the evening. Departing from the stereotypical knights and swords tropes of the genre, this flintlock fantasy has all of the grit and mystery of the early volumes of Martin's A Song of Ice and Fire and the military realism of Bernard Cornwell, with a cast packed with compelling characters and the best treatment of female characters I've seen in a book of its type. Wexler is all but guaranteed to grow in popularity as the series continues and I can't wait to lay my greedy paws on the next installment of this fantastic new series.

3. The Shining Girls by Lauren Beukes: Sadly science fiction and fantasy isn't known for the beauty of its prose. Beukes' time travel thriller is set to change that. With lyrical prose from the first page, this story about a time travelling serial killer and his victims charms and disturbs with equal measure. This novel celebrates the women who fall to the killer's knife with a poignancy and grace that makes them so much more important than the animal that ends their lives. These Shining Girls are the real stars of the novel, and the exact mechanism of the house that allows the murderer to escape justice is left nebulous because it's not the point. As a character study, Beukes' tale is elegant, haunting, and sure to tug at the heart strings so much so that the lack of explanations hardly matter at all. Spend some time with these women and then hand this novel to anyone who turns their nose up at your genre of choice.

2. No Return by Zachary Jernigan: No novel took me more by surprise than No Return. It's chock full of classic sci-fi elements that I couldn't care less about. Robots, truly bizarre aliens, and aloof and terrible gods are all integral to the plot. I freely admit to being less than impressed at the outset, but as I wound my way through the dense narrative I found myself more and more riveted by the fate of Jernigan's characters and the thematic aspects that are wound so deftly into his world building. No Return is a novel that gains depth with examination and I plan to return to its rich and odd depths soon. Jernigan is a talent that bears watching and deserves far more attention than he's gotten due to the implosion of Night Shade Books.

1. NOS4A2 by Joe Hill: I've been a Stephen King fan since I was a teenager, so it goes without saying that I've followed his son's career with interest since his debut. While I certainly enjoyed his work, none of those books struck the same chord as some of my favorites of his fathers. NOS4A2 changed that by the end of the second chapter. Hill turned in a story that is so unsettling and profoundly intimate that I can't think of a single novel I've enjoyed more this year. Vic McQueen is a heroine for the ages and don't even get me started on where Charlie Manx ranks in my best villains of all time list. This is a novel chock full of atmosphere, chilling evil, and characters so real that they practically breathe. Rarely does a novel chill my bones and warm my heart at the same time, and that is why Hill's latest earns top marks this year.

Email ThisBlogThis!Share to TwitterShare to FacebookShare to Pinterest
Labels: 2013 Releases, Books I Loved