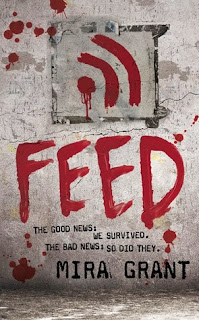 Zombies are a bit of a cultural phenomenon, in case you’ve been living in a cave somewhere. With the success of The Walking Dead there are plenty of novels about the living dead to choose from and I’ll admit to liking more than a few of them. I’d heard of Mira Grant’s Feed earlier in the year, but passed on reading it because it was told after the zombacalypse. I’m a huge fan of end of the world tales and the idea of a novel that was set after the exciting parts were over just didn’t do it for me. But after realizing my own gender bias was brought to my attention, I started seeking out female genre writers and after sampling one of the Seanan McGuire’s (Mira Grant is a pseudonym) other work and enjoying it, I decided to give Feed a go. And despite my earlier misgivings, I couldn’t be happier with this unique and refreshing take on the world post-zombie outbreak. Feed easily ranks as one of the best novels I’ve read this year and it’s taking all of my willpower not to rush out and dive into the rest of the Newsflesh trilogy.

In 2014 mankind had conquered two of the most persistent diseases facing the species. Cancer and the common cold are no more. But when the two cures combine the dead begin to rise to predictable results, changing the world in ways that no one could predict. With every living creature carrying the virus that creates zombies, death is no longer the final rest of the past. Nothing short of a complete destruction of the brain can end the life of the undead. Twenty years later the world has fundamentally changed. The world’s populace living with strict security measures and medical procedures designed to prevent accidental outbreaks. But the change goes even deeper, permeating all aspects of society. The news outlets of the past have been replaced by bloggers who can spread information more quickly and reliably without the oversight of sponsors and governmental influence. Feed follows Georgia and Shaun Mason, a brother and sister blogging team, as they cover the campaign of a presidential hopeful. When tragedy and zombie outbreaks begin to follow the candidate, the Masons begin to suspect that someone with powerful connections is either trying to end their candidate’s chances or something even more sinister. What follows is more thriller than horror novel, with the undead serving as a weapon in the hands of villains who are very much of the human variety.

Grant’s world building is top notch and in the fast and loose genre of zombie fiction it is a real standout. There is plenty of scientific theory behind the virus that causes the dead to rise, including some interesting mutations that affect our principle narrator Georgia Mason. The virus touches all aspects of society; with entertainment, politics, animal rites and more present in the narrative. Georgia Mason with her reporting background is an excellent source of information with plenty of reason to be a knowledgeable on such a wide variety of topics. There are points where the narrative feels a little more like an info dump, but given the source it’s a minor quibble as it’s easy to imagine Georgia’s thought processes running like a news report.

There’s action and suspense a plenty as well, with surprises and tragedies around every corner. Grant includes the predictable fights against the undead often enough that you never forget that Feed is a zombie novel, but never descends into a grind house blood bath just for shock value. The shocks come from revelations of a deep conspiracy that deeply touches not just the entire country on a political level, but our group of intrepid bloggers on a deeply personal one. The characters are top notch, and Grant does an excellent job of making their fates something that readers deeply care about. I can honestly say that I have rarely been so caught up in the lives and deaths of characters as I was in this novel. Feed reminds me of the best and worst moments of King’s The Stand in which we come to love and care for these fictional people and though we know that everyone rarely comes out alive in novels such as these we rail against the author as they murder our darlings. Feed has just that kind of punch and an earnestness that make it one of the best novels I read all year. If you are a fan of zombie fiction, or just old standbys told in new and thought provoking ways, then I cannot recommend Feed more strongly. I just hate that I waited this long.
Posted by Unknown at 6:39 PM