The Girl Who Circumnavigated Fairyland in a Ship of Her Own Making by Catherynne M. Valente

My love of genre fiction was cemented at an early age. I voraciously devoured The Chronicles of Narnia and every one of Frank L. Baum’s Oz novels I could get my eight year old hands on. Those books were my gateways to the fantastic and even though I’ve certainly dabbled in other genres my reader’s heart has always belonged to stories of magic and unexpected heroism. Catherynne M. Valente’s The Girl Who Circumnavigated Fairly Land in a Ship of Her Own Making is cut from the same gossamer cloth of those classic tales and reminds me simultaneously of those childhood classics and more recent standouts such as Gaiman’s The Ocean at the End of the Lane.


Lovers of fairly tales and poetic prose will thrill at Valente’s tale of twelve year old September, who leaves the dreary loneliness of Omaha to visit Fairlyland on the back of flying leopard accompanied by the Green Wind. Once in Fairyland she gathers allies and is sent on a quest by the evil Marquess, and learns lessons in friendship, courage, and even grief along the way. Valente pens a classic fairy tale, without ever resorting to a paint by numbers plot or a dumbing down for younger readers. The Girl Who Circumnavigated Fairyland in a Ship of Her Own Making deserves to be an instant classic sharing shelf space with the likes ofPeter Pan, Alice in Wonderland, and The Wonderful Wizard of Oz.

Like the king of modern fables, Neil Gaiman, Valente takes the familiar and turns it on its head, layering the strangeness of migrating herds of bicycles, soap golems, and a wyvern who believes his father is a library with elegantly stated insights on childhood and the frightening slide into adulthood. There are scads of classic tropes that remind readers of the tales that captivated their younger selves, but Valente wisely twists these familiar elements into something all together new and unique. Her take on Fairyland is unlike anything I could have expected and I look forward to checking out the next volume as soon as Mount To-Be-Read has been toppled.

What sets Valente’s tale apart from other modern stories of this ilk, is her prose. The entire narrative is rich with lyricism and yet remains accessible for readers of all ages. There are definitely some more anachronistic word choices but the context informs the reader well without the need from assistance from Miriam-Webster. This accessibility carries over to the themes of the novel as well, making The Girl Who Circumnavigated Fairyland in a Ship of Her Own Making a tale that can be enjoyed in very different ways in different phases of the reader’s life. I look forward to reading this story to my daughter at the earliest opportunity and am confident that she’ll read it again by herself, many times.

September exudes just the right mix of childish innocence and irascible charm. She’s rash, kind hearted, but just a few degrees off the perfect ingénues of Carroll, Baum, and Lewis. In short, she reads very much like a real girl. That touch of reality grounds the rest of the narrative and gives the real life girls and boys of Valente’s audience a heroine they can relate to and cheer for. Even the most secondary characters have a splash of the real, whether they are blue skinned merids, werewolf witches, or the emerald hued embodiment of the Wind. But perhaps the most compelling character of all, other than September herself, may be the Marquess. When her back story and motivations are revealed I couldn’t help but be sad. Villains lose in fairy tales, and that fact cracked my jaded heart just a little. No small feat for any story, much less a fairy tale.

Catherynne Valente has vaulted onto my must read list with this deceptively complex gem of a story. No matter your age or genre preference, if you love stories and language you’d be a fool not to give this book a few hours of your time. 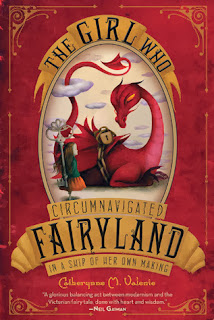