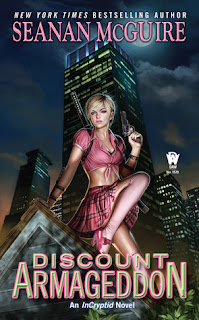 Urban fantasy is a tricky business, especially when the author uses a first person point of view.  But when it’s done well, the results can be exceptional. Seanan McGuire’s Discount Armageddon is a good example of how the strength of the viewpoint character’s voice can carry the story in spite of some questionable story choices.

Discount Armageddon is the story of Verity Price, a crypto-biologist who dreams of a being a professional ballroom dancer but is torn between her personal ambitions and her place in the family business studying cryptids, monsters of both the sentient and non-sentient variety. When female cryptids begin to disappear, Verity discovers Dominic Deluca, a member of the Covenant of St. George, an ancient organization that views cryptids as threats to humanity that should be exterminated operating in Manhattan. Is he the culprit or is there a larger threat to both humanity and cryptids alike?


McGuire’s success rides solidly on the strength of Verity’s narrative voice. Verity is a plucky, capable heroine with the perfect blend of street smarts, sass, and vulnerability. McGuire does an excellent job of providing Verity with enough internal conflicts to keep her from becoming a paint-by-numbers urban fantasy heroine. The romantic subplot that is so common in female centered stories of this type is deftly handled without becoming the focus of the narrative as so often is the case. Verity’s particular brand of banter and humorous asides keeps the tone light even when the situation is dire. I was reminded of the best portrayals of the archetypical wisecracking hero, none other than Peter Parker, in the best way possible.

The world building is fantastic, with a variety of monstrous denizens of New York that would rival a D&D bestiary. The pseudo-science that explains their particular gifts is engaging, though there are places where there is no scientific explanation given for what could only be magical abilities. I didn’t find those bits distracting at all, as there are still plenty of mysteries that science has left to unravel outside of the world of fiction. Though the mention of other dimensions and Hell in particular left me to wonder how McGuire will explain them in future volumes.

The action is tight, witty, and fluid leaving no question as to Verity or the author’s prowess. McGuire uses a blend of dancing, free running and martial arts to construct a fighting style that fits her protagonist to a tee. There were moments when I felt a trained hunter would have armed herself better before tackling a particularly dangerous task, but I suppose carrying more weapons around modern New York would present a narrative problem of equal proportions.

The characterization of the supporting cast is also top notch, with only one exception. Verity’s family is fascinating even though we only get glimpses of them over the course of the narrative. The inclusion of her cousin Sara, a college student specializing in mathematics, who also happens to be a telepathic cuckoo was a standout for me. McGuire takes great pains to make each non-human character the reader encounters not only a interesting mix of attributes and abilities but a person as well. Reader’s will encounter all manner of strange and interesting secondary characters in Verity’s New York. Only the non-sentient creatures are ever treated as monsters, which is appropriate since Verity and her family are sworn to protect and advocate for any cryptid so long as they do not threaten or harm the human’s whose society they inhabit.

Strangely enough, it’s a human character who left me the coldest. Verity’s love interest, Dominic Deluca, is a member of the Covenant of St. George who is sworn to exterminate cryptids, feeling they are monsters and a danger to humanity by their very existence. Complicating matters, is the fact that Verity’s ancestors left the Covenant when they determined that cryptids play an important biological niche, leaving them branded as traitors and in hiding. Deluca’s mannerisms and dialogue are archaic in contrast to the modern setting and were a bit distracting from the overall narrative. Hopefully, Dominic’s mode of speech will eventually modernize as the series continues, or McGuire will give a suitable explanation for his outdated way of speaking.

All in all, Discount Armageddon is a pleasurable if light read with a likeable heroine, fascinating word building, a great cast of secondary characters, and plenty of tightly written action sequences. I’ll definitely be signing on for Verity’s further adventures and if you haven’t read any of McGuire’s work, the beginning of the InCryptid series is a great place to start.
Posted by Unknown at 6:40 PM