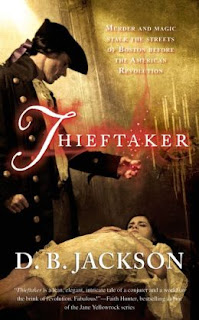 D.B. Jackson’s Thieftaker is one of those books that I’d meant to read a long time ago, but managed to slip through the cracks of my addled prose-addicted mind. It wasn’t until I started seeing the sequel making the rounds on Twitter that I went searching for the title. And I'm sure glad I did. An interesting blend of historical fiction, urban fantasy, and a old fashioned detective yarn, Thieftaker is a spectacular start to a series that I can’t wait to continue. Fans of Diana Gabaldon's Outlander series will take special note, the rich sense of place and historical detail is likely to appeal as are Jackson's excellent sense of character and atmosphere.

Ethan Kaille makes his living recovering stolen property in Pre-Revolutionary Boston. But Kaille is no ordinary thieftaker, he is also a conjurer who uses his magical gifts to assist him in his profession. Due to the suspicion and fear surrounding sorcery, Ethan keeps his skills secret and avoids all but the most mundane assignments. When he accepts an assignment to recover a brooch stolen in the commission of a murder, Ethan finds himself embroiled in a mystery with ties to not only the turbulent and violent politics of the time but to a powerful conjurer whose skill far surpasses Ethan’s own.

Jackson’s PhD is American History is put to extremely good use, with the events of the story being surrounded by real history at every turn. Historical details of the geography of the Boston of that time are seamlessly inserted into the narrative, giving Thieftaker a palpable sense of place and time. A few historical figures even make an appearance and Jackson handles them with an educated pen. More impressive is that no matter how much historical data he is conveying, Jackson manages to avoid ever sounding like he’s lecturing or pulling the reader from the story with a deluge of information. The seamless integration of these details into the narrative speaks to Jackson’s experience writing under another moniker.

Despite somewhat obvious comparisons to other wizard protagonists, Ethan Kaille is not your stereotypical spell slinging detective or investigator. He is certainly capable, but more often than not the odds are stacked against him. Kaille never seems to get out of trouble unscathed, and that’s just fine with me. His fortitude in the face of overwhelming odds, coupled with his sense of honor and all around decency make him easy for the reader to cheer for. Ethan is a troubled and conflicted man who doesn’t fit the mold of the hero as well as many other protagonists in the genre, but the maturity and experience that Jackson infuses into him makes him perfect for navigating the dangerous social and political waters he finds himself swimming in.

There’s magic a plenty in Thieftaker with Kaille able to cast illusions, wardings, and even more powerful spells with little more than some blood and a few words of Latin. The rules of the magical system are loosely sketched but clear cut enough that fans of the uber-defined and complex systems of Brandon Sanderson will not feel like the explanation is just a bunch of hand waving. Jackson wisely keeps the magic subtle in almost every case, focusing instead on Kaille’s ingenuity and experience rather than raw power. The new and unexpected ways Ethan’s magical skill set expands by the end of the novel were a real treat for me and never seem contrived or their for convenience sake.

The element of murder mystery in the plot is expertly done, with plenty of false turns, try-fail cycles, and red herrings. Kaille’s confrontations with the premier thieftaker in Boston, Sephira Pryce cause immense complications in his murder investigation. Add in suspicious churchmen, meddling relations,and threats against his loved ones to complicate matters and it's a wonder that Kaille ever leaves his home. These interludes dealing with Ethan's more mundane problems are well balanced with the supernatural ones, leading readers on a breakneck thrill ride than will leave them out of breath.

One the rare occasion that Ethan isn't being menaced by one adversary or another he is surrounded by an outstanding array of supporting characters. Almost every secondary character in the novel is detailed enough that I can still days later see them fully in my mind. And plenty of them could easily be interesting POV characters in their own right, should Jackson choose to do so. Jackson uses these interactions to showcase Ethan's softer, less guarded and gloomy side, making him much more complex and likeable than the noir detective in funny clothes he could have easily have been typecast as without them. There's a very nicely done romantic subplot included as well, with the object of Kaille's affections, Kannice, being especially well drawn.

There's plenty of action in Thieftaker both of the magical and mundane variety, though our hero isn't always on the winning side by half. Jackson handles it all with ease, keeping the gritty reality of violence from being overshadowed by the magical special effects. There are real consequences to Ethan's confrontations both physically and emotionally, and I applaud Jackson's resisting the temptation to wave that away with healing magic at every turn. The final confrontation and the revelation of the killer's identity is an excellent blend of character interaction, quick thinking, and narrow escapes that plays even better when I read it the second time.

While Thieftaker takes a different approach to urban fantasy than many casual genre readers are accustomed too, they would do well to give this rousing historical fantasy a try. There are exciting and engaging new things happening in between the covers of this novel. I may have lamented not reading Jackson sooner, but the good news is I don't have to wait for the sequel.
Posted by Unknown at 10:25 AM