The Bottom of the Sea by Zachary Jernigan

I don't read a lot of short fiction. In fact, I think I've only reviewed one collection of shorts since starting the blog. But it's not because I don't like them, because I do, but I typically only bother with them if I like the author's longer work. I'm certain that's short sighted of me, but it is what it is. In my limited experience with short fiction, I have concluded that when comparing short fiction to longer work by the same author there are almost no writers that are better in brief. Stephen King is the only one that immediately comes to mind. Zachary Jernigan seems to be poised to be another.

I received a review copy of The Bottom of the Sea from the author and was anxious to see how I'd like his shorts, considering that No Return is on my list of the Top 10 books I've read this year. But it's more than that; I like Zach Jernigan as a person. I've interacted with him on several projects and he's a likeable, self depreciating, witty, and all around awesome guy. So I really wanted to like these stories, and yet was terrified what would happen if I didn't. I'm glad to report that it only took about five pages before I knew I'd been worrying for nothing.  The Bottom of the Sea combines the gritty audacity of No Return with impressive and inventive story telling that asks as much of the reader as it does itself.

But I do have one complaint.

It's too short by half. 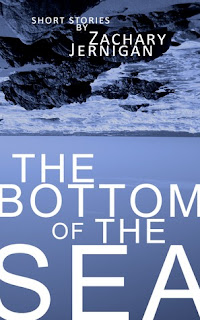 I was tempted to leave it at that but I'd like to think I owe the readers and Zach better than that. I'm going to forego analyzing each story individually because I really think to discuss them too deeply will rob the reader of some of the magic. So I'll hit the high points of each piece and then say a little more about the work as a whole.

Jernigan takes on genocide and prejudice The War is Over and Everyone Wins. It's set in a world where the Caucasian race has been wiped out by a a bio-engineered weapon.The growing population of former minorities has eliminated them for their excesses and yet the world seems to have suffered for it. But all of the crunchy morals about tolerance and the evils of racial supremacy are all but invisible. This is a tale of the dysfunction in a single family all tied to the central pole of the world at large. It's the subtler, more familiar flavor of family discord that is the high point. When the curtains close, it's not the answers that matter but the questions.

Fans of No Return will feel the most at home with Fear of Drowning. I actually wondered if this story may have had some inspirational effect on the novel. Our point of view character for this tale has been taken as a lover by a goddess, only to find herself drawn into the final confrontation between her lover and a powerful lover from the deity's past. Much like No Return, the world building is cast about offhandedly and yet maintains cohesion. Sex is handled very casually here and the godlike beings are definitely the center of the action. This is perhaps the collection's most straight forward tale. Even though it is the most predictable in its structure and narrative, Jernigan manages to deftly slip in observations on both the capriciousness of divinity and the ever changing face of the heart.

If The Fear of Drowning is the most direct story, the story that gives the collection it's title is the most subtle. This story of a blind man who grows to rely on an equally damaged young boy is only genre fiction in its subtle window dressing. Jernigan creates a fully realized sense of locale while actually giving only the most meager of description. I'm inclined to believe it's the voice of the protagonist that sells it. A man so broken, so blind to the filth and poverty around him could only live in the dockside streets that he roams. Sure, there are fantastic things out there, but they are not for him. By the end of the sharply poignant tale of the foolishness of not reaching out, I couldn't decide whether to feel pity or rage for the narrator, and that's the genius of it.

I had the most trouble with Pairs, probably because it's the story that is the most conceptually 'out there'. The concept was meaty, based on the thriving trade on the souls left after the destruction of Earth and the mismatched pair that serve as the ferrymen for the alien merchants who sell them. The sparsity of detail required by the form seemed to weaken this one, and I felt that I could have enjoyed it much more with added length. Not to say it wasn't enjoyable, it is. I just wanted more.

Jernigan saves the best for last, with All My Ghosts. This one starts familiarly enough, with a man and his ill child trapped in a blizzard far from home. The twist comes with the revelation that the man is actually a god.  Not much else is important until the man decides to sacrifice everything to give his son a chance at survival. With that choice and his Herculean trek to return his child to safety, comes the parade of ghosts from the god's seemingly endless lifetime. As a father, this story resonated with me the most soundly, echoing the primal need to protect that all fathers have while simultaneously lamenting the burdens placed upon us by our own fathers as we pass them down to our own children. The end of the story is left vague, and the bracketing passages at the front and end of the story allow the reader to speculate an ending to suite their tastes, but it only highlights the importance of a single man/god's choice.

As a collection, I'd say The Bottom of the Sea fires on all cylinders. Fans of Jernigan's unconventional world building will not be disappointed, nor will those who were attracted to his carefully drawn and ultimately damaged protagonists.Those who have not read No Return will know whether or not to invest in a longer word count based on how much they enjoyed these shorts. The strength of the shorts ultimately rested on the excellent use of literary negative space, allowing the reader to fill in the gaps and trusting the reader to be smart enough to get it right. It's no mean feat to use ambiguity to your betterment, but The Bottom of the Sea makes it look easy.