One of the most common bits of advice for aspiring writers is to write what you know. Larry Correia took that bit of wisdom and ran with it like Jesse Owens. Correia knows guns and b-horror movies and he combines his passions into a novel that reads like a mix of Supernatural and The Dirty Dozen. Monster Hunter International is the first installment in Correia's Monster Hunter series, that as of this writing has two sequels, with a third due out this year. There is also some talk about a role-playing game featuring both the characters and setting of the series. There may not be lots of critical acclaim for the series, but Correia tells an engaging, frenetically paced tale packed with humor, action and memorable characters. 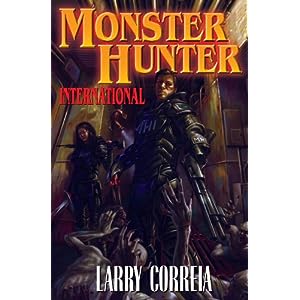 Owen Zastava Pitt is an accountant. Not the typical profession one would normally associate with the protagonist in a book with "hunter" in the title, let alone the word "monster". But when Pitt's boss at his accounting firm turns out to be a werewolf, our protagonist produces a concealed firearm and takes the fight to his insufferable boss. When bullets have no effect, he manages to throw the beast out a window killing it in the multiple story drop. Due to his injuries Owen wakes up in the hospital. he finds out that monsters are real and the government is taking great pains to keep it covered up. The two men in dark suits that come to visit Owen make it absolutely clear that pain is the operative word. But another visit has something else in mind for Owen. His survival against all odds has brought him to the attention of Monster Hunter International, and they have a job for him.

Sounds just like a B-movie, doesn't it? Correia, wisely doesn't try to make the story something that it's not. The cliches are out on proud display. The monsters are for the most part just what you'd expect, there is a prophesy, some dream-walking, and psuedopod who is the really big bad. Corriea doesn't take himself too seriously and it shows. This is a book about killing werewolves and vampires with lots of guns and explosives. It's the side order of cheese that makes it, and Corriea milks it without ever evolving into unintentional satire. Some elitist readers might complain, but I doubt even that. In my experience there aren't many people that don't deep down really love cheese.

In spite of that, Correia manages to elevate his story above its B-movie roots. The characters are surprisingly well drawn. Our narrator, Pitt is a likeable and quirky narrator. While his capabilities are a bit over the top, Correia manages to tie that fact to his back story in a way that in spite of being a little forced doesn't make you groan. The Monster Hunters, who remind me a little of what would happen if Blackwater was staffed by the A-Team, are full of black humor and gung-ho bravado. Many of them seem fairly one note at first, but as their back stories are fleshed out it is easy for readers to find someone to relate to. There are burgeoning friendships, camaraderie, jealousy and grudges aplenty. There is even a significant romantic plot thread that is handled well, even if the object of Owen's desire is something of a go to fantasy for almost every geek out there.

The antagonists while largely straight out of central casting, are more than mustache twirling villains largely due to Corriea's wise use of Pitt's ghost fueled dreams. The monsters are far less interesting than the members of the government's monster control task force charged with policing the hunters and keeping all knowledge of the supernatural from the general populace. The contrasts between the "true believers" in government service and the professional hunters who make scandalous amounts of cash for bringing down monsters of all kinds make for an interesting dichotomy.

The violence is plentiful as are guns of all shapes and sizes. Corriea's knowledge of the subject take center stage here, but he manages to do so without bogging those readers who have little to no knowledge of firearms in the an excess of minutia. Choosing to tell the story from Pitt's viewpoint makes it feel fairly seamless, because the his knowledge mirrors the author's so closely.  Action sequences are in your face, loud and flashy, with spent shell casings and explosions in abundance. Many of these sequences would translate well to a summer block buster, and I for one think this story is begging for a translation to a visual media. Readers of the series can feel free to e-mail me to discuss dream casting.

Monster Hunter International excels in all the areas it should, and never makes the mistake for trying to apologize for it. Corriea more than delivers the goods on action, likable characters, and humor while still adding more depth than a reader would have any right to expect given the roots of it's premise. I'll be looking forward to reading more adventures from Pitt and the rest of Monster Hunter International's wild bunch.  For now I'm going to whistle the A-Team's theme song and start thinking about my dream movie cast.