You Should Be Reading: Ken Scholes

Let's get this right out in the open, I think Ken Scholes is an awesome human being. With that said, I read Ken's first novel, Lamentation before I made this discovery. I stumbled upon Ken's series, The Psalms of Isaak though the Science Fiction Book Club. I was so impressed with the novel that I looked the author up, found his blog and wrote a short note congratulating him on the novel and letting him know how much I had enjoyed it. Much to my surprise we exchanged an email or two. He shared writing tips and other pleasantries and seemed a humble and friendly fellow. I felt lucky to have shared a bit of correspondence with an up and coming author who's work I had particularly enjoyed. Fast forward a bit, and I friended him on Facebook not expecting anything more than updates on his writing and other such things. But on a whim, I messaged him when I saw him online, and he took the time to chat with me briefly and encourage me in my own writing. We've corresponded a bit more since then and I always walk away from the keyboard feeling uplifted and encouraged. He's even commented on a few of my status updates regarding my work in progress.

Since then I've read the next two novels in his series, Canticle and Antiphon and my enjoyment in the world, characters, and story he's created has only increased. I recommend them frequently, always with the addendum that Ken is a awesome guy on top of being an incredibly talented writer. I've been disappointed that it seems that Ken doesn't get the recognition of some of the other authors I enjoy that are up and comers. I know that Ken still has a day-job, and twin girls to raise, and I would love to see him gain enough popularity to be able to write full time. I'm being selfish, it means more books for me. So here I am plugging the series. Take a gander at my thoughts on the books and then if you like what you see, pick up Lamentation and join the tribe. 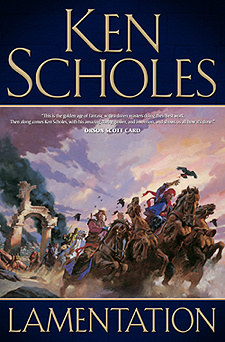 The Psalms of Isaak starts off with the destruction of Windwir, home to the great library of the Androfrancine Order who protects the world from the knowledge that predates the last great apocalypse that nearly destroyed civilization. The population of Windwir is wiped off the map by an act of terrorism that is perpetrated by a mechano-servitor named Isaak who has a secret all his own.

Scholes' cast of characters is sizable and their reactions to the destruction of their worlds greatest city are varied and reflect their places in the world. I found something to relate to with every point of view character and was surprised to find myself identifying with characters I have absolutely no common ground with. Petronus, an aging former Head of the Androfrancines is a definite stand out as are Jin Li Tam and the titular Isaak. Scholes has the ability to write a wide variety of characters with an even handed skill that reminds me of no other author so much as George R. R. Martin.

The political fallout and machinations of the various factions seeking answers and retribution for the destruction of Windwir, while not as labyrinthine as those in A Song of Ice and Fire are complex enough that you'll be kept guessing and fans of that wildly popular series will not be disappointed.

Another stand out feature of Scholes' world is the fact that he blends traditional sword and sorcery with science fiction and some elements of steam punk so well. The result is a world unlike any other I have encountered in the hundreds of other world fantasy novels I've read. The elements of science fiction are gradually introduced over the course of the published books and I was quite surprised with the direction the series seems to be headed in. Much like Lamentation the series as a whole promises to take readers to places and directions they'd not expected.

I won't risk any more spoilers, by reviewing the other two books in the proposed five book cycle, but hopefully this will whet your appetite enough that you'll give Lamentation a try. I guarantee you won't be disappointed, and like I said in the beginning Ken Scholes is an awesome guy and in a perfect world that should mean something.

Email ThisBlogThis!Share to TwitterShare to FacebookShare to Pinterest
Labels: You Should Be Reading