The Company by K.J. Parker

Many of the genre review blogs I frequent have recommended the work of K.J. Parker. The Folding Knife to be specific. So while perusing the shelves of my local bookseller, I went in search of it. Sadly, I found only a smallish selection of Parker's other works. The most recent, Sharps appears to contain a lot about fencing which I found intriguing, but another stand-alone novel caught my eye. Intrigued by the cover quote hinting at an amalgam of Lost and the Italian Job, I promptly made my selection and headed home to crack open this promising new find. 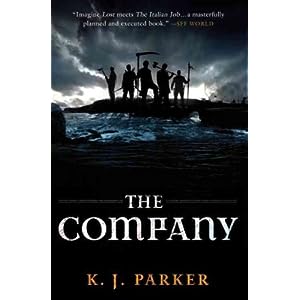 I'll admit the cover quote is what sold me, but the only thing this book has in common with Lost is that it takes place on an island, and the Italian Job reference doesn't hold much more water, but that is more a fault of the marketing department than any criticism of Parker.

The premise is a strong one; a group of former soldiers reunited years after the war is over decide to settle an abandoned island together confident that the bonds that held them together in their tenure as an elite military unit will sustain them in a new life. After all, war is surely more perilous than building a self-sufficient utopia with your closest friends.

Parker's story is rife with unexpected perils, reversals of fortune, the specters of a past, and the power of friendship to both heal and wound. Sounds pretty awesome doesn't it. Well sadly, the results are a bit of a mixed bag.

My initial problem is with the character names. Most feel like placeholders and are either so unimaginative as to be wholly forgettable or so unwieldy that they disrupted my reading experience. The five men who make up the company are easy enough to remember and differentiate between, but almost all of the secondary characters are not so lucky. This problem is aggravated when the protagonists arrange marriages for themselves before setting out for their new island home. The wives seem fairly two dimensional, with the exception of the hare-lipped wife of the leader of the expedition. This may seem like a quibble, but I found myself having to stop and reorient often to remember who each character was and who was married to whom. I normally read fairly quickly and this rather average sized book, took much longer because of such confusion.

The pacing also leaves something to be desired. In spite of the reversals of fortunes and the often unexpected ways that problems arose, the book never seemed to gather a head of steam and really move forward. The initial quarter of the book was understandably slower, as the protagonists were introduced, back story was inserted with well placed flashback sequences, and initial steps of setting out for the island were conquered. But even once landfall was made, things never seemed to speed up. The once informative flashbacks broke the pacing and the stakes never felt so dire as to make me need to read the next chapter right away.

My main complaint was the ending. Parker had an excellent opportunity to show these characters at their best, working as a team against insurmountable odds, but decided instead to allow them to fall to their own sins in a way that bordered on slapstick. I was left feeling let down. But even after all of that, I can't promise I'll never read Parker again.

Parker has important things to say, and the characters of The Company makes several halfhearted attempts to step onto their soapbox, but never quite manage to take a stand. Parker asks questions about friendship,  about men of war who no longer have an enemy to fight, about whether love can grow on stony ground, and about what happens to a dream set aside for so long that its tempting fruit turns to poison from neglect. I just wish that even one of these themes had been given enough room to shine.

Email ThisBlogThis!Share to TwitterShare to FacebookShare to Pinterest
Labels: Review of the Week