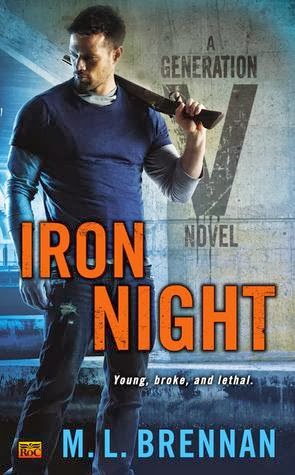 Urban Fantasy has a bit of a mixed reputation. Many folks see it as an excuse to write erotic detective novels with a cast made up of undead, werewolves, and as many other supernatural beasties as possible. I've never really gotten the appeal of that style novels preferring my urban fantasy to be a more action flick than soap opera. Which puts me firmly in the camp of avoiding any novel with a protagonist that seems to fit that mold. Which basically means vampires as a major part of the cast are essentially a deal breaker for me. M.L. Brennan's Generation V was an exception to that rule. With a protagonist is who is still refreshingly human despite his vampire status and an intriguing, original take on the vampire mythos Brennan set the stage for a urban fantasy novel that I could not only enjoy, but I could recommend to friends without fear of anyone casting aspersions on my masculinity. The sequel, Iron Night was one of my most anticipated novels of the year, and Brennan didn't let me down delivering a superior sequel that offers the perfect balance of humor, heart and action that left me hating myself for devouring the novel so quickly.

Since beginning his transition to true vampiric status, Fortitude Scott's life seems to have improved, he's finally free of his toxic ex-girlfriend, found a better job at an upscale restaurant, and he's found a roommate that not only pays the rent on time, but is actually becoming a friend. Sure, he's had to begin taking a larger role in maintaining the family business of keeping the supernatural beings in his mother's territory in line and is spending more time getting his ass kicked as he tries to learn how to fight, but life is looking up. When Fortitude's roommate is murdered, the Scott family immediately sweeps it under the rug and is content to leave it at that, but Fort has other ideas. He calls on Suzume, the kitsune the only person outside of his family who he can trust and sets out for answers. But despite his fledgling new abilities and Suzume's aptitude for detective work, it's quickly obvious that Fort may be over his head again.

Iron Night succeeds based on Brennan's deft hand at crafting characters who the reader can easily relate to despite the other-worldliness of the story line and her original take on tropes that long time genre readers have seen hundreds of times. Fortitude Scott, for all of his developing abilities and ties to a vampiric dynasty that stretches back hundreds of years, is a regular guy. A bit dorky, insecure, and struggling with his finances and navigating this new life as a vampire he's tried to avoid for so long. Fort's not much different than any twenty-something guy I hung out with in college. He is a perfect stand in for the average male genre reader. He's relatable and his motives and reactions resonate perfectly.

The supporting cast is among my favorites in urban fantasy. Suzume, Fort's partner in crime and seeming love interest is a standout once more. Fort's growing friendship with the kitsune is a standout part of the novel and the deepening connection between them has not one iota of the hurry to bed approach that is so lamentable in many urban fantasy novels. Fort's interactions with his family take a more prominent role in this volume and his sociopathic sister Prudence, gets some much needed depth. The family tableau of the Scott family makes for some tense reading and sheds some light on the vast differences between the three siblings and lays the groundwork for some serious fireworks in future novels.

Brennan's refreshingly original take on vampires was well explored in Generation V, so this time she expands and fleshes out another supernatural element only hinted at in the first volume. And once again, the completely unexpected approach that the author takes  makes their motivation absolutely repellent and completely understandable at the same time. I guarantee you've never seen elves in this light before. As the supernatural elements of the world expand, I can't wait to see Brennan's take on other iconic creatures and how they will interact in this modern setting.

And I would be completely remiss if I didn't mention the humor. Anyone who follows Brennan's Twitter feed already knows that this is an author with funny to spare and she infuses her dialogue with enough witticisms and pop culture references to keep readers in stitches through out the novel. Rarely, has a novel made me laugh out loud so many times.

The only thing that kept this sequel from being a complete home run was how closely the plot structure mirrored that of the first novel. It's a minor quibble and the formula certainly works, but I couldn't help but notice it. I have a feeling that with the growing scope of the cast, world building, and Fort's role in the family business that this is a problem that will take care of itself with time. Iron Night is surprisingly tight novel, at just over three hundred pages, but Brennan manages to keep things from feeling rushed, and yet the novel flew by for me nonetheless.

If you like fresh takes on old tropes, characters you'd gladly drink a beer with, and laughing your ass off at three in the mornings, you should definitely give both Generation V and Iron Night a try. M.L. Brennan is the best thing to come out in the urban fantasy market in years and you can even carry the book in public without shame.
Posted by Unknown at 6:28 PM