The Rose and the Thorn by Michael J. Sullivan 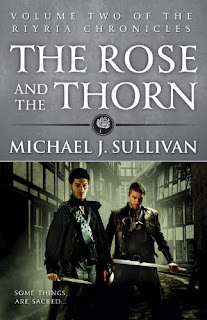 Prequel stories are a dangerous proposition; just ask George Lucas. The knowledge of what comes after, of the end game if you will, can taint the enjoyment of these stories from the very beginning. The stakes are even more daunting when the principle property is beloved by a legion of fans. Even after reading Michael J. Sullivan’s excellent first prequel novel to his uber-successful Riyria Revelations series, The Crown Tower, and loving it, I was a bit concerned that he might not be able to catch lightning in a bottle again.

While not as satisfying as the previous effort, The Rose and the Thorn is still packed with all of the things that made Sullivan such a powerhouse in the genre. There are banter and battle in equal measure, a touch of romance, sharply drawn characters, and the wonderful blend of nostalgic sword and sorcery that hearkens back to the books that led many thirty and forty-something readers to the genre in the first place.

The Rose and the Thorn takes place almost a year after the events of The Crown Tower and delves into the forging of the unlikely partnership of Hadrain and Royce into the familiar duo of Riyria. Upon returning to Medford, after a year on the road, our heroes find that their savior Gwen DeLancey is in trouble. One of the women of Medford House is missing and implicated in a plot to kill the King of Melengar and a Gwen is now a target of powerful nobles with secrets to hide. The plot is nothing groundbreaking, it is Sullivan doing what he does best. High stakes, frequent reversals, and a deeply layered sense of the world in the smallest of schemes. There is no doubt that there are larger forces in play here, and readers of the Riyria Revelations will see the beginnings of larger plot lines and that information, while unnecessary to the main plot line, definitely sweetens the pot for faithful readers.

And that’s the real genius in the way that Sullivan has approached this return to the property that brought him so much acclaim. He’s crafted a story that hits all the same notes as the preceding novels while filling in the back stories of beloved characters all while telling these early tales in such a way that is accessible and rewarding for new readers.

So let me confess something. I read a lot, and despite having read all of the previous work in this series I find myself foggy on the details. So in some ways, I’m a hybrid reader for this particular project. And it works astonishingly well. Sullivan doesn’t rely on past knowledge to tell the tale, and gives just enough to jog my fuzzy memory. The Rose and the Thorn is a romp with old friends in a lot of ways, even if the glory days are somewhat hazy with time.

In addition, Sullivan makes some wise choices to move some secondary characters to the forefront of the prequels. I found the richness of Hilfred’s story to be particularly satisfying Seeing the depths of his heroism and being aware of the way that his story plays out only adds to the emotional heft of his sacrifices. Gwen DeLancey isn’t given as much screen time as she had in The Crown Tower, which I think is a bit of a waste, but she certainly plays a pivotal role in the forming of Riyria and makes an excellent foil for the moody and often inhuman Royce. Their relationship, even in its infancy serves to soften Royce into the character readers fell in love with in A Theft of Swords.

I’d say that The Rose and the Thorn may be a slightly weaker book than The Crown Tower in terms of the number of surprises for long time readers, but at the same time it’s the connection to the overall plot of The Riyria Revelations that makes it much more important. That’s hardly a criticism and readers, even me, like to feel like part of the club and The Rose and the Thorn provides that in spades.  I’d say Sullivan has discovered a gold mine of potential stories that will continue to prove popular for as long as he can keep to this winning mix of the familiar formulas, new perspectives, and untold adventures.
Posted by Unknown at 8:07 PM