Wes Chu's novel, The Lives of Tao, has been one of my favorite debuts of the year. Chu delivers a thrilling concoction of science fiction, spy thriller, and buddy comedy that is sure to connect with readers across multiple genres. Wes was kind enough to agree to an interview and answered questions about Lives of Tao, the upcoming sequel and his experiences as a debut author. I hope you find his answers as enjoyable as I did. Wes was a pleasure to work with and I am certain he will have a long and fruitful career if his first novel is any indication. So with great pleasure, I give you Wes Chu. 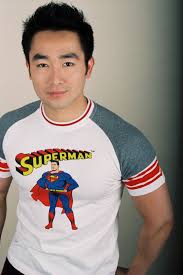 52 Reviews: Though I’m sure you’ve answered this question in countless interviews, can you tell us a little about the genesis of The Lives of Tao? And how did it change from inception to final product?

Wesley Chu: The Lives of Tao started off as an alternate history book that not so much changed history, but changed the reasoning behind why things happened in our past. I always found the why of something happening much more interesting than the how. Having the Quasing war allowed me to create an entirely new narrative.

While world building though, I made a few interesting rules that changed the story.

1.     I decided that the Quasings inhabiting the hosts couldn’t control them. They could only speak with them.
2.     The Quasing couldn’t leave the host until the host died.

Suddenly, the story became less about the aliens changing the world (though still a great backdrop to the story) and more about two personalities stuck with each other trying to make things work out (and not get killed in the process). Suddenly, the relationship that grew between Roen and Tao became the most interesting part of the story.

52 Reviews: I like to think of The Lives of Tao as a genre bender, mashing up science fiction tropes with those of spy thrillers. Chuck crossed with Invasion of the Body Snatchers, if you will. Was the decision to cross genre lines your intention from the very beginning or was it something that developed naturally over the course of writing the novel?
Wesley Chu: It definitely was a natural progression as I fleshed out the characters and plot. I really didn’t think about genres that much. I knew having aliens automatically put it in the Sci-Fi category, so I just shrugged and went with it. The Lives of Tao has been called urban fantasy, a comedy, and a science thriller. My agent has even categorized me as a romance (bromance) writer. I’m all right with all those classifications.
52 Reviews: Your choice of protagonist is an intriguing one. Roen Tan seems to be emblematic of a generation of adults who work soul crushing jobs, not because there are no other options but because they lack the ability to take a risk to change their lives into something different and more fulfilling. Was this an attempt at social commentary, a reflection on your own personal journey, or simply a gold mine for humor?
Wesley Chu: Yeesh. I’ll take all of the above. I admit to be a closet political activist who doesn’t have the balls to actually run for office or try to make a difference. Let’s face it, there are only so many fights one can get involved in on the Huffington Post comment boards before one want to put a fist through your computer.
As for it being a personal journey, I was talked out of becoming an English major by my English Professor father. He basically told me that if I did follow in his footsteps, my “life will suffer.” I took the practical route and studied computer science, and have been trying to get back on this path ever since. It only took about twenty years, but hell, better late than never. In the end, having the corporate career I had afforded me some luxuries (like being unemployed) that I probably would have struggled with if I tried to become a novelist straight out of college.
52 Reviews: One of the things I liked best about The Lives of Tao was the banter between Roen and just about every supporting character in the book. Humor is notoriously difficult for many writers, what advice would you offer to those that struggle with this aspect of fiction?
Wesley Chu: Writing’s not exactly the most social endeavor. Novelists spend their days mostly alone sitting in front of a computer. If it wasn’t for my dog, Eva Da Terrordale, my ass would never see the sun. Humor is one of the most difficult human interactions to nail in a book. I believe that’s why it is underrepresented in SFF.
To do humor well requires a lot of practice socializing with others. Talk to people. Hang out with different sorts of folks. Be stupid and have no shame. Humor is all about timing, and to get a good grasp of that timing, you have to hang out with a lot of people. For me, a lot of the responses Roen had in the book are how I would have reacted honestly with my friends. Yes, I lead a pretty stupid life sometimes.
52 Reviews: Was your decision to turn one of the supporting cast members into a Prophus bearing agent at the conclusion an attempt to demonstrate the hero’s journey from a very different point of view in the sequel, or do you have more sinister plans in mind?
Wesley Chu: What happened at the end of Lives was a setup for the second book. The focus in Deaths will be a little different from Lives. Lives was all about coming-of-age. Deaths will be about consequences.
Let’s just say the complexity of the story is tripled in the sequel. And yes, things do get more sinister, but not the way you think. Let’s just say their five hundred plus year old war might finally be coming to the end. For everyone.
52 Reviews: What can you tell us about the sequel to The Lives of Tao that is dropping later this year? Are there plans for even more novels featuring Roen, Tao and Company?
Wesley Chu: I can tell you The Deaths of Tao is dropping Oct 29, 2013. The ante’s been upped. The new villain, Enzo, is nuttier than Sean and even more deadly. Jill gets more involved in the story and she’s not quite as nice as she was in Lives. That’s all I can say.
As for the third book, that’ll depend on the hive mind and the readers. So, let’s make it happen!
52 Reviews: What is the biggest lesson you learned with Lives? How did it impact the writing of Deaths? And did Deaths teach you something new?

Wesley Chu: The biggest lesson I learned from writing Lives was that there’s a life outside of writing. When I began to write, I quit martial arts, stopped hanging out with friends, and essentially became a hermit. Seasons passed, friends got married and had kids, Duke Nukem actually came out, and people actually paid to become virtual farmers! Uh…wut? So yeah, have a life outside of writing.

I carried that lesson over to Deaths by getting a dog and trying to actually see my friends once in a while, though all I did when I saw them was answer the question, “dude, what happened to you the past five years?”

52 Reviews: The Lives of Tao appears to be widely well received, what has been the most surprising and rewarding aspects of your time as a debut novelist?

Wesley Chu: What I enjoyed the most about the entire experience was meeting and hanging out with all these other writers. Like I said earlier, writing is a pretty damn lonely career. I spent the better part of a decade wandering from café to café in Chicago. I was like a transient tourist going from coffee shop to coffee shop.

Once I went to my first convention and met all these great people that loved books as much as I did and understood me, I was hooked. Or as I often like to say, I felt like a hobbit returning back to the shire.

52 Reviews: The use of the Prophus to tie the events of real world history into the narrative world of the novel was one of my favorite aspects of the book? Is there a chance that we might see a more detailed account of the Prophus and Genjix in a historical setting?

Wesley Chu: I originally had a completely separate plot line with Tao in the historical settings. My editor felt that the second plot slowed the story a bit too much and asked to reduce them to the historicals at the beginning of every chapter. Not gonna lie; cutting out the 20k+ worth of words hurt, but the robot masterminds were wise. It did speed up the story.

I do plan to release the full historical chapters as either short stories or on my website sometime in the future. Stay tuned.
Posted by Unknown at 8:20 PM