Ken Scholes is, in my opinion, one of the most underrated writers in the industry, seamlessly combining disparate elements of both science fiction and fantasy in his epic fantasy series The Psalms of Isaak. His world building is sweepingly original but maintains a comfortable familiarity to long time readers of the genre. So when Ken agreed to take part in this series and asked what topic I'd like him to cover, world building was a no brainer. I found Ken's approach to both unexpected and intuitive and am sure you'll agree. Enjoy. 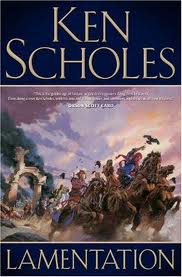 I’m pleased and grateful that Matt asked me to participate in his series of guest posts on speculative fiction writing.  When he invited me, I asked which topic he’d like me to tackle and he suggested world-building.

Now, though I’ve created dozens of worlds over the years including the world in my series with Tor, The Psalms of Isaak, I don’t for a minute consider myself an expert on the subject of world-building.  I’m still learning as I go, having just recently finished my fourth novel, and I’m already seeing what I’d like to do differently the next time I tackle a multi-volume series.  Still, it’s a topic I have some experience with.
When I think about the world my stories take place in – whether it’s truly a world or a universe or just a room in a house – I think about it only in terms of doing what is necessary to suspend the disbelief and engage the imagination of my reader.  The setting I place my story in is as critical to that story’s success as the characters I place in that setting and the problems that they face.

The Psalms of Isaak was my first foray into creating a big world and my approach to it was actually rather sparse.  I didn’t start out with copious notes or a map or any of that.  I started out with telling the story and allowed the world to fill itself in as I wrote.  I don’t think I even had a map until I’d finished Lamentation. Most of the world lives in my head and in the pages of the books I’ve written.  Other than some map sketches, I don’t think there are any notes around about the Named Lands.  But I do have some other things.  Other stories from earlier in the history of that world – things referred to as myth or history in the series and now being expounded upon – that reveal more of the earlier times that produced the present.  But I also have bits of verse and snippets from imagined books.  And, throughout the series, references to events, artists, actors, leaders, beliefs, quotes, descriptions of meals all to make that world a place readers can imagine.

I try to think of the things that make our world feel plausible, real, believable and then layer them into my narrative about this other world.  But again, I try to keep it light so that my reader is using their own imagination to fill in the gaps.  I like to get them to do the heavy lifting.

The other thing I do in regards to my world-building is actually rooted in my characters.  I tend to be quite brutal about my third person limited POV and that also translates into how my characters interact with their world.  If they are in a familiar place they are not going to spend pages and pages on the texture of a leaf or how the banking system works.  They will have enough information in their head about those things to move through them but not enough to bog down the story into an info-dump about things that they would never pause to think about in the midst of their present activities.

POV can be a great tool – perhaps the greatest tool – for showing readers your world.  But not all at once in paragraph after paragraph of detail.  Instead, little bits of world revealed here and there as the characters move through it.  And a world is more than what a character sees – it is what they hear, smell, taste, touch – which gives a writer tons to work with.  And by layering in those details, spread out across an entire book, you build a sense of your character’s connection with their world that the reader then experiences vicariously.

So, distilled down to a few bullet points, here are my suggestions for world-building based on my own process (so your mileage may vary):

Again, big thanks to Matt for including me on his guest list.  You’re all welcome to follow my regular Saturday blog at Genreality.net, chase me down on Facebook, or find out more about me at www.kenscholes.com.