Review of the Week: Fortress Frontier by Myke Cole

Myke Cole's debut effort Control Point was one of the standouts of 2012 for me. So I was pumped to get an EARC of its sequel, Fortress Frontier, late last year. I dove in, getting about a third of the way in before finding out that reviews needed to be held until January. I had other books in queue, so I set it aside and didn't get back to it until shortly after the holidays. I was afraid that breaking up the reading might hurt my enjoyment of the story but my fears were quickly proved groundless. With Fortress Frontier, Cole dodges the sophomore slump and turns in a sequel that not only builds on the momentum and success of its predecessor but surpasses it in almost every way. 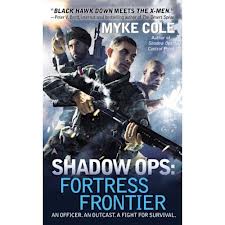 Here's the story summary provided by the publisher:

The Great Reawakening did not come quietly. Across the country and in every nation, people began to develop terrifying powers—summoning storms, raising the dead, and setting everything they touch ablaze. Overnight the rules changed…but not for everyone.

Colonel Alan Bookbinder is an army bureaucrat whose worst war wound is a paper-cut. But after he develops magical powers, he is torn from everything he knows and thrown onto the front-lines.

Drafted into the Supernatural Operations Corps in a new and dangerous world, Bookbinder finds himself in command of Forward Operating Base Frontier—cut off, surrounded by monsters, and on the brink of being overrun.

Now, he must find the will to lead the people of FOB Frontier out of hell, even if the one hope of salvation lies in teaming up with the man whose own magical powers put the base in such grave danger in the first place—Oscar Britton, public enemy number one…


Cole's choice to start with a completely new viewpoint character instead of jumping directly back into the story of Oscar Britton, the protagonist from Control Point, was an unexpected surprise. Cole has taken a lot of criticism on the character's constant waffling and poor decision making and deftly dodges that hot button by introducing readers to Col. Bookbinder.

While I didn't find Britton's character in the least bit as objectionable, I instantly found Bookbinder to be more relatable. As a officer with no combat experience who has risen through the ranks for his organizational skills and military bureaucracy, Bookbinder was a man who is more like the rank and file reader than the battle hardened soldier, Britton. This fact made his underlying conflict of trying to navigate not only his new found magical gifts but his place as a leader of men of violence much more intriguing than Britton's angst of duty versus personal ethics if for no reason that the answers are much easier to navigate. Bookbinder, like Britton, doesn't always make the right decision but the results are in some ways a bit more satisfying in their conclusion.

Which is not to say that Oscar Britton is left behind. Cole catches us up with Oscar as he tries to make amends for the destruction his escape from the FOB wrought, before he can attempt to find his place as a fugitive from the nation he served for so long. Britton comes off better here, as he has a clearer course of action and I believe he is much more sympathetic as a result.

We also catch up with some of the secondary characters from Control Point, including Downer, Swift, and Truelove with some surprising additions that I, for one, never saw coming. Which is welcome, because I felt the new supporting cast was a bit weaker than those from the first novel.

The only thing I felt was missing was a truly compelling antagonist. With Fitzy removed at the end of Control Point, I had hoped that Cole would provide another foil for Britton to fill the gap, but with Fortress Frontier being more Bookbinder's tale than Britton's, I was left wanting.

Cole also expands the world itself, showing us not only more of the magical world of the Source and the workings of other nations within it, but also introduces a subplot of a resistance movement on the home plane against the impressment of magic users into military service. I found the differences between the U.S. and India's operations in the source and their reactions to the Great Reawakening interesting and hopes that we see more of other cultures represented in future volumes of the series. The resistance angle, while definitely nothing new was also welcome, reminding me of classic comic story lines of my youth. I think Cole could do new things with this subplot and would welcome more in this vein.

As before the actions sequences are visceral and chaotic showcasing Cole's real world knowledge of the subject and if anything they've improved from Control Point. I followed along a bit better this time, but whether or not that was due to my experience with Cole's style or a subtle shift in the writing, I couldn't say. The prose and dialogue has improved as well, showing Cole's growing maturity as a writer. While it could still be called workman-like, I don't think of that as a criticism. Every sentence propels the reader forward to the action packed conclusion, which makes setting the book down a challenge. Not a damn thing wrong with that.

If you were on the fence about Control Point, you should definitely give Fortress Frontier a go. Cole delivered a rousing sequel with all of the high stakes action and drama of the original all while expanding the world in new and exiting ways. Myke Cole is here to stay and so should you.