Review of the Week: The Blinding Knife by Brent Weeks

Obviously, I read a lot. I'm at fifty two books so far this year. And this year hasn't been a year with a string of mediocre fiction. 2012 has been the year of Ready Player One, Control Point, The Night Circus, Wool and World War Z. I'll just come out and say it, The Blinding Knife is the best book I've read this year. 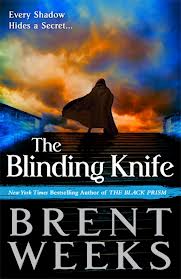 I've not been bashful about my love for Brent Weeks' books. My original intention was to write a You Should Be Reading post about him before reviewing The Blinding Knife. But this book was too good to wait even a week to review. Justin over at the excellent Staffer's Musings has this to say:

"I've read all five of Brent Weeks' published novels and it's a certainty that he's evolving with every book. With The Blinding Knife, I believe he's entered a new stratosphere and one that puts him on par with anyone who's written these kinds of stories. It isn't only the best book he's written; I consider it one of the best epic fantasies I've read."

I couldn't agree more. Like Justin, I've read all of Weeks' fiction, and it's all been excellent. The Night Angel trilogy was excellent and is often a feeder series I recommend to friends unfamiliar with the genre. The Black Prism, which starts the Lightbringer series that The Blinding Knife continues, has one of the best plot twists that I can recall in any book I've read. I often compare that reveal to the end of The Sixth Sense when describing the book to friends. So yeah, I'm a fan. But I felt like Weeks' was either holding back or getting ready for something even better, and boy was I right. The Blinding Knife is a masterwork of a novel (I know at least eighty percent of you get the reference) full of exquisitely drawn and believable characters, a surprisingly intricate magical system, break-neck pacing and more "no he didn't" moments than Rush Limbaugh's entire career.

Since The Blinding Knife is the second installment in a series, I'll start with some background information. The Lightbringer series is set in the Seven Satrapies loosely reminiscent of the Mediterranean. The Satrapies are ruled by two part government consisting of the more secular Prism and the White, a religious leader not unlike the Pope. The Black Prism spends a lot of time explaining the intricacies and history of the setting as well as explaining the magical system of drafting different colors of light into varying types of matter. Drafting impacts society on almost every level. Architecture, religion, and education are all effected and Weeks lays the groundwork well, even if it is understandably a bit long winded at points. With all of the groundwork established, The Blinding Knife jumps right in assuming the readers are more than familiar with the premise and all of its considerable detail. Even though I didn't remember every nuance of the magic system or setting, Weeks layers reminders though out the plot in a fashion that never felt forced and in no time at all, the mechanical bits faded into the background allowing me to fully engage in the gripping tale of Weeks' cast of characters.

Weeks' created a truly extraordinary magical system. With drafters able to create virtually anything through drafting the portion of the spectrum that they can control, Weeks' would seem to be in danger of falling into Green Lantern territory. But he sidesteps any but the most superficial comparison because of the depth of detail built into the magic system. The material created through drafting, called luxin, has physical properties that change depending on its color. Adding even more depth is the psychological implications of drafting, each color exerts a different influence on the drafter. Some make the user more impulsive and others more emotionally detached. Weeks uses all of these details to good effect through the course of the novel, giving drafters unwanted side effects to using their magic. I love this system of magic, finding it on par with the creations of other industry heavyweights such as Brandon Sanderson and the late Robert Jordan.

As deft as Weeks' magic system and setting are, what sets The Blinding Knife apart from the many excellent novels I've read this year is Weeks' gift for characterization. Weeks continues with the adventures of the cast from The Black Prism; Gavin, Kip, Karris, and Liv adding a handful of other characters along the way. His handling of Kip and Liv impressed me the most, as both adolescents struggle to find where their true identity separates from the people their station and circumstances dictate that they should be. Their voyages couldn't be more dissimilar by the end of the novel, but the common thread of facing the consequences of their own mistakes binds them together to form the heart of the book for me. Weeks embodies them both with the foolishness and vulnerability of youth in a way that makes the reader cringe when they choose poorly against all sense, and cheer when they triumph not only against those who would attempt to control them. The other characters, including the secondary ones are equally conflicted while faced with their own moral and ethical dilemmas. This is a novel about choices, and Weeks' characters don't hesitate to make mistakes and the price is often dearer coin that they ever expected.

Weeks does wonders with the antagonists in The Blinding Knife, particularly with Gavin's father Andross Guile, member of the Spectrum who rules the Seven Satrapies under the guidance of the White and the Prism. Every scene that Andross appears in positively drips with menace even though their is little to no threat of actual violence. Andross is a puller of strings, a master of working from the shadows and much like our characters I started to see his skeletal hand everywhere. I found myself looking forward to his meetings with the other members of the Guile family more than any scene with the more obvious threat of the Color Prince who was moving to invade the Seven Satrapies at the head of a nearly unstoppable army of drafters. If you love to hate Lord Littlefinger in George R. R.Martin's A Song of Ice and Fire, you should do yourself a favor and get to know Andross Guile right away.

Another standout aspect of The Blinding Knife is the pacing. This book reads more like a James Patterson thriller (one of the good ones, anyway) than Frodo's adventures in Middle Earth. There are over a hundred chapters in six hundred and twenty-five pages. Readers will have a hard time putting this book down to sleep, work, or spend time with their families. The plot is intricate with plenty of twists and turns and Weeks surprised me over and over again to the point that I was almost weary with the shock. Amazingly enough, even with the exhausting pace and metric ton of twists I never saw coming, I could have easily have read for another hundred chapters. To tell it true, I would have read this book until my eyes bled and called it a joy.

I think that in a few years readers will look back at The Blinding Knife as the point where Brent Weeks went from being an up-and-comer to an author whose name belongs next to stalwarts of the genre like Martin, Jordan, and Brooks. Run, don't walk and get this book. You won't regret it.